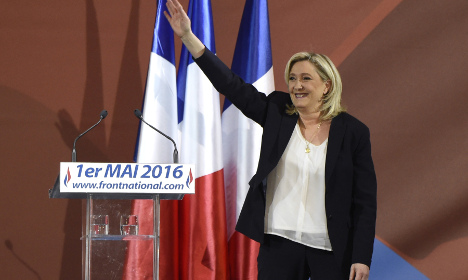 Traditionally, the FN gathers on May 1st in front of a gilded bronze statue of the peasant girl — who fought against the English occupation of France during the Hundred Years War — on the Place de Pyramides square.

Jean-Marie Le Pen, 87, kicked out of the party for refusing to tone down racist and anti-Semitic comments, held court at the traditional spot in front of about 400 supporters where he woefully predicted a loss for the FN in next year's presidential elections.

“There has been no sign sent in the direction of reconciliation,” said the firebrand father of the FN, adding that without unity the party “would be beaten in the second round, maybe even the first.”

“We must all make an effort to only focus on that which unites us against decadence and adversity,” he said, warning against the “fatal” danger of mass immigration.

After taming the FN's racist rhetoric, Marine Le Pen has overseen an unprecedented rise in the party's fortunes and many pollsters predict the FN will make it to the second round of the presidential election.

This has only happened once before in a shock breakthrough in 2002 by Jean-Marie Le Pen, who was later beaten by Jacques Chirac.

Joan of Arc, burned at the stake in 1431, was later made a saint by the Roman Catholic Church and became a symbol of French resistance adopted to the cause of the anti-immigration FN.

Last year Marine Le Pen had her May Day ruined when her father strode onto the podium uninvited, and bare-chested Femen feminist activists later disrupted her speech with Nazi salutes and a “Heil Le Pen” flag.

This time Femen was back in action: half a dozen bare-chested activists in gold skirts protested in front of the venue where the FN was holding a banquet, spraying champagne and chanting “Long live the end of the FN”.