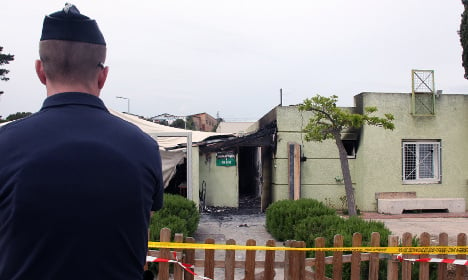 The building, one of the largest prayer halls in the capital Ajaccio, suffered major damage in the fire. Photo: Yannick Graziani/AFP

The blaze occurred just months after the island, popular with tourists for its turquoise waters and picturesque mountains, was rocked by anti-Arab riots over Christmas.

The building, one of the largest prayer halls in the capital Ajaccio, suffered major damage in the fire, said Abdallah Zekri, the head of the National Observatory Against Islamophobia.

He called on the authorities “to do everything to shed light on this incident in order to avoid an escalation of violence”.

“It has been calm since the end of the year, but unfortunately certain ill-intentioned people want to inflame the situation,” he told AFP.

Protests erupted on the Mediterranean island over Christmas after firefighters and police called to a low-income immigrant neighbourhood were ambushed and attacked.

Demonstrators shouting slogans such as “This is our home!” and “Arabs get out”, vandalised a prayer hall and set fire to books including copies of the Koran.

Several anti-Muslim acts occurred in the weeks that followed, including an attack on a Muslim butcher's shop.

He also voiced the “commitment of the government to protect all places of worship, and to ensure freedom of worship throughout the territory”.

Nationalists won regional elections in Corsica for the first time in December.

The island has the second largest proportion of foreigners in France, at between eight and 10 percent of the total population, after the Paris region.