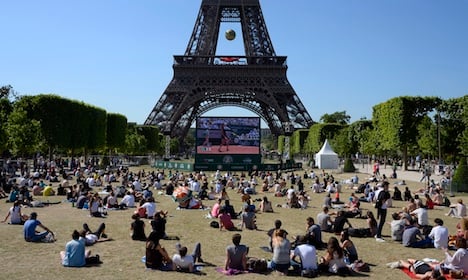 Great news for ale appreciators. For a whole ten days, craft beer lovers across the capital are invited to “drink good beer in different places, drink good beer with good people, and to 'spread the love'… while drinking good beer”… With pleasure. Details of beer tastings, beer walking tours and workshops that will be going on can be found here.

What started as a joke on Facebook is soon to become a mouthwatering reality in southern city of Béziers. Following mayor Robert Ménard's comment about not wishing the city to become the “capital of the kebab”, internet user Baptiste Fluzin set up a Facebook event as well as numerous tweets in retaliation, proposing to host an 'International kebab festival'.

Within a day, over 30,000 people had clicked 'attending' and the festival is now set to take place next week, with now over 60,000 attendees.

Get to Lyon and join the 80,000 festival goers at the 14th year of their electronic music festival. A showcase of all kinds of electronic sounds; from internationally known artists, to undiscovered French bands, DJs and hip hop artists.

Venues across the city are transformed by the festival, including exhibition spaces, abandoned warehouses and even a swimming pool on the bank of the Rhone.

Chocolatiers take to the streets of France's chocolate capital once a year, to share their secrets on the making, dipping, coating and most importantly eating of their renowned cocoa based treats.

Over the course of weekend, guided tours retrace the history of chocolate back to the 17th century and traditional musical performances take place, fully embracing the celebrations. A week-long festival takes over this south western city of France once a year with an enormous celebration of local tradition, including bull fights in the amphitheatre, parades through the streets, peñas (folk bands) and firework displays.

Whole families join in the fun, putting in impressive amounts of effort to costumes. The event attracts over a million visitors a year so put on your sombrero and get down south. Olé, Olé. Although tickets may be hard to get hold of for the annual tournament, it is a huge deal in Paris so you will be able to watch the matches live at numerous bars and screens across the city. So brush up on the rules of tennis, because it is all anyone in France will be talking about for two weeks.

Since its launch in Paris in 2000, 'Neighbours Day' has become a global success, with people across the world seizing the opportunity to get to know the people living nearby, even if it might be the first time they have spoken all year.

If nothing else, it's a good excuse for a party and people across France will be organizing garden parties and aperitifs in the communal areas of their apartments or roads, so if you haven't already – get involved.

It's that time of year again and this year will mark the 69th year of the festival. As always this period will be a prime time for a bit of celeb spotting on the French Riviera, sipping a glass of rosé. The jury for this year's panel has just been announced to include Kirsten Dunst and Australian director George Miller as President.

Cast of 'Only lovers left alive' at Cannes, Photo: AFP

Ever year, museums in cities across Europe participate in the celebration of the 'European Night of Museums', by opening their doors for free until 1am. The Louvre, Palais de Tokyo and The Chateau de Versaille are just a few of the places in Paris that will participate this year.

Disclaimer: there will be queues. But it will be worth it for the extra effort the museums put on during this evening with performances, temporary exhibitions, and interactive activities.

The Louvre at night, Photo: AFP

This festival has been going on since 2007 in Normandy, to commemorate the anniversary of the Allied Landings in Normandy during the second world war. This marks an important part of France's history and the festival takes over the city with film screenings, historical walks, reconstructions and theatrical performances, making this one of the best times to visit Normandy for history lovers.

This year is the tenth edition of the festival and so all nine tourist offices of the D-Day Landing beaches will be collaborating to put on an exceptional presentation.