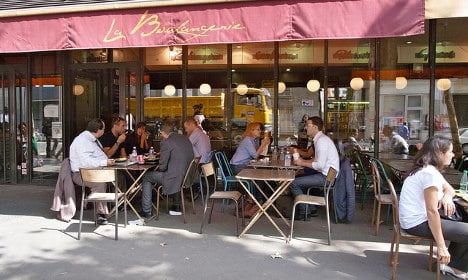 Photo: kattebelletje/Flickr
Lunch time breaks in France are a sacred thing.
Unlike in many other countries, you're unlikely to spot workers here hunched over their computer during their lunch breaks typing with one hand and eating with the other.
In fact, a survey this week found that 43 percent of French people spend over 45 minutes eating lunch each day. This was by far the biggest percentage for the extended break of all 14 countries surveyed.
The survey, based on the responses of 2,500 employees of French corporate services company Edenred, found that the Brits and Americans were far less likely to take a 45-minute break at just 10 and 3 percent respectively.
In France, meanwhile, 34 percent said they spend between 30 and 45 minutes, 21 percent between 15 and 30 minutes, and just 2 percent spend less than 15 minutes on the midday meal.
READ ALSO: Nine French eating habits you will probably find peculiar In Britain, the most popular lunch break length was between 15 and 30 minutes, which 43 percent admitted to. Another 28 percent of Brits take fewer than 15 minutes, meanwhile, which seems barely even enough time to leave the building, let alone sit down and enjoy the food.
In the US, 51 percent of respondents said they spend 15 to 30 minutes, while 33 percent opted for 30 to 45 minutes. Some 13 percent went for less than 15 minutes.
The survey also found that over half of the Czechs took less than half an hour, and that no one in Greece spent more than 45 minutes at lunch.
And while Italy was the closest match to France of the countries that were quizzed, only 7 percent of Italians actually spent over 45 minutes eating.
It begs the question – why exactly are the French so keen on their long lunch breaks?

“Meals are the most enjoyable moments of the day. We only miss them on rare occasions,” he told The Local.

READ ALSO: And the favourite dish of French people is…?

He described mealtimes as “an important social time” and added that “family identity, work teams or friends are built around these moments”.

“And sharing food is a way of establishing a connection with other people,” he added.

Other reasons could be that the French are masters of restraint – something they learn from a young age – so the fact that they don't snack all day must leave them aching for a good lunch.

Let's not forget, as well, that a lunch in France will often involve an extra course, some wine and a post-lunch coffee, which you would be at a push to squeeze into 15 minutes.

De Saint Pol said that the French don't consider lunch as “a moment to refuel”, as perhaps those in the US and the UK might.

“Eating is not only to give us energy, but even more than this, a moment where our identity is formed by what we eat, how we eat and who we eat with,” he said.

So while the Anglophones may be putting in more time in the office, perhaps we could learn from the French. Not only could we savour our lunch for a change, but we might just be missing out on a crucial bonding moment with colleagues or family.