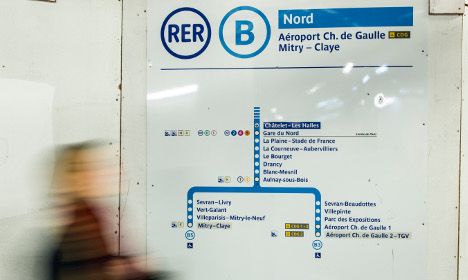 RER B one of the train lines hit by Thursday's protests. All Photos: AFP

Air and rail transport in Paris was hit by cancellations and delays on Thursday after the CGT union called on members to join a walk-out in protest over the controversial planned labour reforms.

In Paris the main impact of the strike will be on the RER B line that serves both Charles de Gaulle and Orly airports.

Only 50 percent of services are running and passengers heading to Charles de Gaulle airport will have to change at Gare du Nord.

Metro, tram and RER A services will run “almost as normal”.

International services like the Eurostar will be spared any disruption as will other RER lines.

In terms of air traffic, aviation authorities in France have told airlines at Paris Orly airport to cancel around 20 percent of their flights as air traffic controllers and other airport staff join the protests against labour reforms. That means hundreds of flights will likely be cancelled at Orly airport, while aviation authorities from the DGAC are also warning of potential delays at the capital’s main airport Charles de Gaulle.

“At Roissy Charles de Gaulle there will very likely be delays but not cancellations,” said a spokesman from the DGAC.

In a statement released to the press the authorities are also warning about disruptions to flights throughout the whole country.

Passengers are advised to check with their airlines before travelling to the airport.

Thursday will once again see demonstrations against the labour reforms take place across the country, many of which have descended into violence in recent months.

The raft of changes are basically aimed at making it easier for companies to hire and fire workers and make rules around working hours less rigid.

The protests are being led by student and high school unions as well as leftist trade unions like the CGT and Force Ouvrier (FO).

Many of the workers at Orly airport are members of the CGT, hence the reason why Orly will be more hit than Charles de Gaulle airport, where the union has less of a presence.