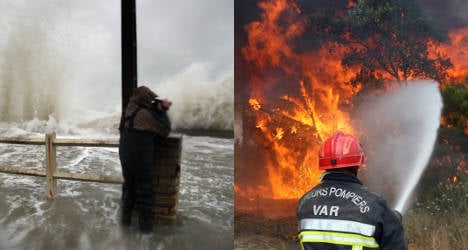 The French are dangerously unprepared for the natural disasters they are exposed to, like windstorm Xynthia (left) and 2007 forest fires (right). Photos: Kenzo Tribouillard/Valery Hache/AFP

What can be done to educate the French people about the risk of natural disasters, and how can the damage be limited?

There has been a series of recent warnings about a dangerous lack of preparation for the catastrophic effects of inevitable future disasters, whether it be a massive earthquake or the flood of the century in Paris.

A survey in 2013 by polling firm Ifop found that 78 percent of French people were unaware of what to do in the event that France’s national alert system is triggered, and 63 percent didn’t know the risks that their geographical location exposed them to.

French historian Emmanuel Garnier laments what he calls the “selective amnesia” of the French when it comes to natural disasters, and a failure to take seriously the dangers associated with them.

“We have created this myth of a welfare state that can simply stop catastrophes from happening,” Garnier told Le Parisien.

These dangers appear significant. According to the country’s Ministry of the Environment, two thirds of France’s towns and villages are exposed to the harmful effects of either flooding, mudslides, earthquakes or forest fires.

France has seen several major natural disasters in recent years, including last year's devastating and deadly floods in the French Riviera. With a repeat of these kind of catastrophes seemingly inevitable, we look at the likelihood of each disaster, and what can be done to limit the damage. The risk of a repeat of the Great Flood of 1910 in Paris has been in the news a lot in recent months.

The Paris-based OECD (Organization for Economic Cooperation and Development) warned that a lack of bureaucratic cooperation between local, regional and national authorities was placing the capital under severe risk from another “Flood of the Century.”

Earlier this year Paris authorities staged a major week-long exercise to prepare for the flood.

It's not if, but when, was the message from experts.

Other parts of France have been hit by devastating flooding in recent years.

In 2013 two people were killed and up to €400 million worth of damage was done when flooding in the Pyrénées region of southwestern France decimated, among other places, the Catholic shrine at Lourdes, and caused terrifying scenes such as shown in the video below, along the banks of the river Gave.

In October last year, towns across the French Riviera were left counting the costs after “apocalyptic floods” left 19 dead.

But the danger from flooding isn’t limited to these two corners of France. According to the Ministry of the Environment, fully 18,000 towns and villages are exposed to similar risks.

Bruno Lafon, president of the National Association Against Forest Fire, reflects the frustration of experts in convincing the public about the serious danger posed by forest fires.

“15,000 people move [to the forests of the Gironde region] every year, but they don’t know that lighting a barbecue can be extremely dangerous, or that a cigarette butt thrown out the car window is like a torch,” he told French daily Le Parisien.

The potential for disaster was seen back in 1949  when over 80 people reportedly lost their lives in forest fires which got to within 42 kilometres of Bordeaux. And in 2013 raging wild fires threatened the resort of Lacanau in the Gironde region.

Lafon, and others like him, will be hoping the French people can take on board the real risk of catastrophe in wooded areas of France every summer, and avoids scenes like these, during the forest fires of 2003 which destroyed 61,000 hectares in the south-east of the country.

According to the Ministry of the Environment, 6,000 towns and villages are at risk from forest fires.

Historian Garnier points out that even after a massive storm in 1937 on the west coast, authorities continued to build homes in the flood basin, being overly confident in the ability of their seawall to withstand Atlantic waves.

When the violent windstorm Xynthia battered the western coast of France in February 2010, La Faute-sur-Mer, which built a sea wall in the 1950s was almost entirely flooded amid winds of up to 160 km/h.

The person who captured this video from that night survived, but Xynthia claimed 53 lives in France. In October this year the destruction that violent storms can wreak was seen in northern France and across Europe.

A reminder of how France can be hit by earthquakes came on April 28th when a 5.2 quake hit the west coast, near La Rochelle.

Recent seismic event in Brittany and on the French Riviera may not have caused injuries, but the panic it caused should be a reminder that, according to the Department of the Environment, a staggering 21,000 French towns and villages are situated in earthquake-prone areas.

That region of western France is located on a system of faults called the South Armorian Massif, but seismic activity is also very common in the south-east and Alpine areas of the country, as shown in this map, which depicts the five seismic zones of mainland France.

After an earthquake in Provence in April 2014 experts warned tha it was only a matter of time before a big one hit France.

Those were the words of French seismologist Remy Bossu from the European Mediterranean Seismological Centre (EMSC) in Paris. Residents of affected areas in France will be hoping that the next disaster will not be a repeat of the 6.2 magnitude Lambesc earthquake of 1909, which hit the Provence region of southeastern France, destroying 3,000 buildings and killing 46 people, as shown in this photo slide show.

And when it does strike, Bossu says we could see the scale of damage seen in the historic Italian town of L’Aquila which was devastated by an earthquake in 2009 that left nearly 300 dead. After the quake six scientists were jailed for manslaughter for playing down the risks of earthquakes.

A version of this article was originally published in 2013, but has been updated after the earthquake in western France on April 28th.