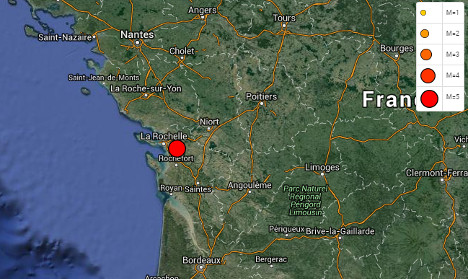 Photo: Renass
The quake – which measured 5 on the Richter scale – hit at 8.46am on Thursday morning,  according to France’s National Earthquake Surveillance Network (Renass).
The local prefecture reported that the magnitude reached 5.2, but said that the tremor wasn't big enough to warrant action from emergency crews.
The centre of the quake was at Rochefort, around 25 kilometres south east of La Rochelle on France's west coast. Many in the area reported a shake-up to start the day.
“I was sitting in bed reading when the bed felt like it was being lifted up and shaken, the rest of the furniture in the room was also shaking and the dressing table were rattling,” Facebook follower Marie McMullan told The Local.
Dielle Ciesco, who lives in Brossac to the south of La Rochelle said it was a “peculiar feeling”.
“My husband and I were at two separate ends of the house when it shook,” she told The Local.
“At first I thought it was a passing truck but everything kept shaking. We both yelled out “earthquake!” at about the same time and went online immediately to see if there were any reports or if we'd just imagined it all.”
Mike Tupman Reid in Montboyer told The Local that he felt his attic beams “shuddering”, adding that it felt “like a giant stomping around for about ten seconds”.
There have been no reports of any serious structural damage or any injuries.
READ ALSO: French 'unprepared' for future natural disasters
France hasn't been hit by a fatal earthquake since 1909, when 46 people were killed and 250 were injured in the town of Lambesc in Provence (see pic below).
However, experts warn that France is long overdue for a large-scale quake. “We don’t know when a big one will come, but it will and there will certainly be fatalities,” French seismologist Remy Bossu from the European Mediterranean Seismological Centre (EMSC) in Paris told The Local previously.
EMSC’s Bossu says deadly quakes of a major scale like the one in Lambesc hit France on average every 100 years, so based on averages a big tremor is due.
As to where it will hit, no one can be sure, but the tweet below gives an indication of the at-risk areas.
According to the Department of the Environment, a staggering 21,000 French towns and villages are situated in earthquake-prone areas.