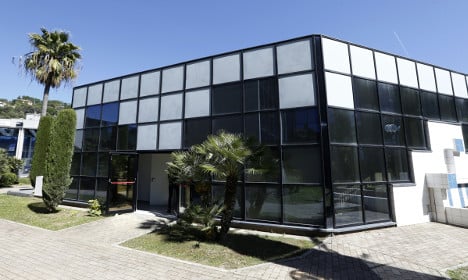 The newest mosque in Nice. Photo: AFP
The “En-Nour” mosque in Nice is an impressive construction.
The downstairs hall boasts an area of 350 metres squares and can accommodate almost 900 worshippers. The area is magnificently lit by a huge skylight.
On the second floor there is a reading room for children, a library, and a separate prayer room for women.
But the mosque, in downtown Nice, may never officially open to the public. While the building itself was completed in November last year, the mayor of Nice Christian Estrosi is still standing in the way of it opening.
The mayor, who represents France's centre-right The Republicans party, got the green light on Monday to sue the French state in a bid to block the opening of the mosque.
He has long claimed that the project was unauthorized from the beginning, which was back in 2002 before he came to power.
Estrosi has several other gripes with the place of worship.
He accuses the owner of the mosque – Saudi Arabia's Islamic Affairs Minister Sheikh Saleh bin Abdulaziz – of “advocating sharia” and wanting to “destroy all of the churches on the Arabian peninsula”.
He has also said that the French finance ministry's intelligence unit Tracfin is “worried” about how the mosque was financed, and he warned of “unregulated foreign funding”.
And now he has approval from the council to take the central government's regional representative – Prefect Adolphe Colrat – to court over the issue. Alpes-Maritimes Prefect Adolphe Colrat and Nice Mayor Christian Estrosi. Photo: AFP
The mayor has suggested that the building should, in fact, be a nursery.
Not all agree with Estrosi. For one, the opposition councillor Patrick Allemand accused the mayor of “feeding populism”.
“It is a stigmatising approach, you point the finger at a whole community,” he said.
Feiza Ben Mohamed of the Muslim Federation of the South (FMS) said that Estrosi “completely obscured” the fact that the mosque had sent its financial records in to authorities already.
“He doesn't want the mosque because he wants to start something instead where he can stick his nose in the affairs of the Muslim faith,” he told the RFI channel.
Meanwhile, the locals in Nice have shown their support for the mosque, with a petition in its support garnering over 2,000 signatures.
And it's no surprise that the mosque is popular. Practicing Muslims in the Riviera city have so far only had one smallish downtown option at which to pray, where worshippers can spill out on the street at peak praying times.
For his part, Prefect Adolphe Colrat has already given conditional approval for the opening of the mosque.
He said the mosque “doesn't depend on any foreign influence” and called for it to be a beacon of Muslim worship in Nice and the region.