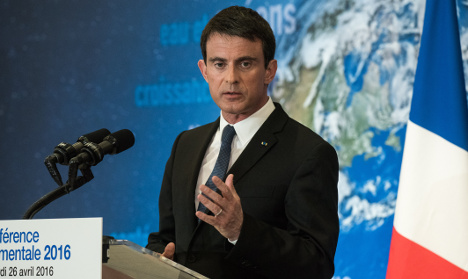 France emerged Tuesday as a leading voice of scepticism over plans for a US-EU free trade zone covering 850 million people,
bluntly warning it will not accept a deal that lowers standards for people's health and the environment.

Flying in the face of US President Barack Obama's call for a groundbreaking deal to be wrapped up this year, senior members of the French government said there was no urgency and, indeed, the likelihood of striking any pact at all is waning.

Negotiators are this week sitting around a table in New York seeking a way forward to create the world's biggest free trade area covering the United States and Europe, which has been under discussion since 2013.

They aim to topple remaining trade tariffs, which are already relatively low.

But, far more challenging, they must agree on streamlined rules for politically sensitive areas such as product standards, genetically-modified crops, the environment, consumer protection, how to decide disputes between big business and states, and how to treat jealously guarded geographically-based brand names like champagne.

Chance of a deal 'fading'

“I want to be clear: it will not succeed if it does not guarantee that the standards we have in France for our citizens' health and environment will be maintained,” French Prime Minister Manuel Valls told an environmental conference in Paris.

Earlier, asked about whether a deal may be reached before the end of Obama's term in January 2017, Matthias Fekl, France's minister of state for foreign trade, told broadcaster RTL: “No, I don't think so. The likelihood, or risk, of reaching any accord is fading.”

Fekl, who is France's envoy to the talks, added that there was no desire in Europe to “sign up to anything at any price”.

Speaking on a visit to Germany, French Finance Minister Emmanuel Macron said “there is no urgency” to sign a deal which France has to be sure is “complete, ambitious and which does not disown any of our interests” but is drawn up “fully transparently”.

His comments come a day after US and European negotiators opened a 13th round of talks on the Transatlantic Trade and Investment Partnership in New York, which are expected to last a week.

Should the agreement succeed, it could give an economic boost of 120 billion euros ($135 billion) to the EU and 95 billion euros to the United States by 2027, according to a 2013 study carried out by the London-based Centre for Economic Policy Research and financed by the European Commission.

Earlier this week, Obama and German Chancellor Angela Merkel made a joint pitch for more transatlantic trade, vowing to complete the US-EU pact in the face of mounting opposition in Europe.

On the eve of Obama's visit to Germany, tens of thousands of people demonstrated in the country against the proposed pact which has raised fears it would erode ecological and labour market standards, and in protest over the secrecy shrouding the talks.