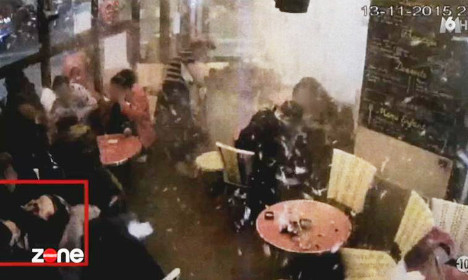 Photo: Zone Interdite Screenshot
The short and graphic clip was shown on TV programme Zone Interdite, which is broadcast on the channel M6 on Sunday night.
It shows Brahim Abdeslam, 31, brother of Salah Abdeslam standing in the middle of the Comptoir Voltaire cafe in eastern Paris. He puts his head in his hand as diners look on, before he detonates his suicide belt and is thrown out of view of the camera.
It was only Adbeslam who died from the blast, and it's understood that the belt did not detonate correctly.
Twenty of the customers in the cafe were injured by the blast, one seriously.
The footage, which is embedded below, proved difficult to stomach for some French viewers on Sunday.

WARNING: This footage should be viewed with discretion.
“I have goosebumps, butterflies in my stomach and I'm in tears,” one viewer wrote on Twitter.
The channel noted that anyone under the age of ten was prohibited from watching.
Those behind Sunday night's programme defended the act of showing the footage, in which the faces of other diners are blurred.
“To understand the magnitude of what happened, you have to see it,” the show's director Christian Huleu told the JDD newspaper.
“I tried to find a balance between the violence and paying respect to the victims and the viewers.”
Photo: Zone Interdite Screenshot
It remains unknown at this point how the channel got access to the footage, but the French have reacted strongly in the past when similar videos from the attacks circulated.
The owner of the Casa Nostra restaurant, which was also targeted in the terror attacks, was lambasted for selling CCTV footage of the shooting to the UK's Daily Mail newspaper for €50,000.
Brahim Abdeslam was a member of the jihadist team who targeted cafes and bars across the east of the capital leaving dozens dead.
He headed to the Comptoir Voltaire after being dropped off by attacks ringleader Abdelhamid Abaaoud.
His brother Salah, who is currently being held in a Belgian prison, and is expected to stand trial for mass murder in France. He was arrested shortly before the Brussels terror attacks in March, when 32 people died.
He is also believed to have been part of the Paris attacks, though did not detonate his own vest.
The November terror attacks in Paris left 130 dead and 350 injured. The vast majority of the deaths occurred at the Bataclan concert hall, though dozens died in a handful of cafes and restaurants across the city. The Comptoir Voltaire cafe, which has since reopened. Photo: AFP The cafe is located in the east of Paris, in the 11th arrondissement. Photo: GoogleMaps