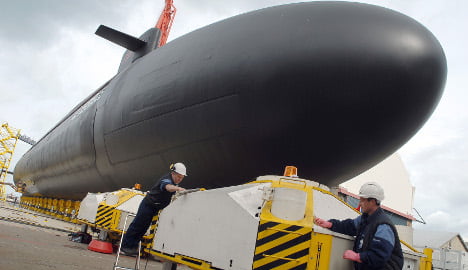 French naval contractor DCNS Tuesday was picked ahead of Germany and Japan for a €34 billion (US$39 billion)
contract to design and build Australia's next generation of submarines in the country's biggest ever defence procurement programme.

The announcement by Prime Minister Malcolm Turnbull culminates years of planning to replace Australia's ageing diesel and electric-powered Collins Class submarines, which are due to leave service from around 2026.

Turnbull said the 12 new subs “will be the most sophisticated naval vessels being built in the world”.

“The recommendation of our competitive evaluation process… was unequivocal, that the French offer represented the capabilities best able to meet Australia's unique needs,” he added at an Adelaide shipyard, where the submarines will be constructed.

“This is a momentous national endeavour. This is securing together with our commitment to surface vessel construction, this is securing the future of Australia's navy, over decades to come.”

“It marks a decisive advance in the strategic partnership between the two countries who will cooperate over 50 years,” his office said in a statement.

“This new success will create jobs and development in France as in Australia.”

A Japanese government-backed consortium led by Mitsubishi Heavy Industries, and German group ThyssenKrupp Marine Systems were also in the running, but DCNS was considered “best to meet all of our unique capability requirements”.

Besides matching the range and endurance of the Collins Class, the new generation needed to offer superior sensor performance and stealth capabilities.

DCNS has said it planned to build a 4,500-tonne conventionally-powered version of its 4,700 tonne Barracuda, to be named Shortfin Barracuda, described by the company as “the most technically complex artefact in Australia”.

It said on its website that the new vessel would be “the recipient of France's most sensitive and protected submarine technology and will be the most lethal conventional submarine ever contemplated”.

“In a confrontation between two otherwise identical submarines, the one with pump jet propulsion always has the tactical advantage.”

It added that the sonar suite performance “will be the best available ever for a submarine this size”.