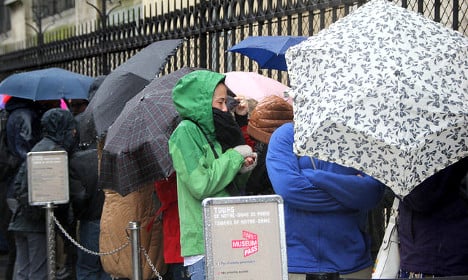 They sure were wonderful, those few, glorious days of springtime filled with sunshine, cherry blossoms, and picnics in the grass. But now they now seem like a distant dream. Wintery weather has swooped back in to put a dampener on the last week of the school holidays.

Perhaps it's punishment for enjoying such a relatively mild winter? According to BFMTV, it's because of a nasty polar air system that's moved in over the country and brought with it some chilly temperatures.

Whether it's karma or just nature doing its thing, it's probably best not to put away your coats and scarves for another week or so. Things won’t be looking up until at least the beginning of May.

Temperatures around France are six to seven degrees celsius lower than average, with the western coast being battered by chilly winds and residents of Ile-de-France being warned that the clouds and cold might be joined by any combination of rain, sleet, and hail.

The chilly temperatures will more or less stay the same on Tuesday and Wednesday and rain showers are expected in many parts of the country, but especially in northeastern France.

Even on the French Riviera the locals were donning their jackets on Monday, something they don't normally do at the end of April.

The coast-dwellers have cold winds in store on Tuesday, with wind gusts of up to 90 km/h expected on the island of Corsica.

Snow at the end of April? N'importe quoi

Snow has even fallen on some parts of the country, mainly the southeast but even as far south as the Lozere department. The snow is set to continue through Monday afternoon in the Vosges and Jura mountain ranges. Spring skiing, anyone?

We'll just have to keep our chins up by remembering the old adage: April showers bring May flowers, right?

Well, the first week of May is still supposed to be a bit colder than average, but at least the rain will have stopped.

Even in the southern part of the country, temps are cooler than usual, but they sure look better than up north.

If you're lucky enough to be down in those sunny parts, we just have one thing to say to you: Can we please come visit?