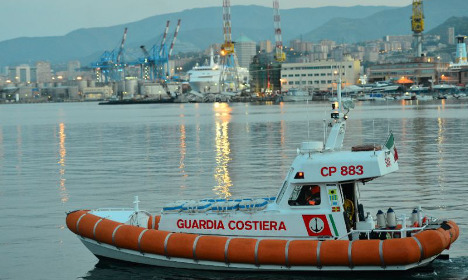 The oil slicks formed after an April 17 pipeline leak at an ageing refinery near Genoa. Photo: AFP

“The situation in the waters between Genoa and the French border has significantly improved,” said Giovanni Pettorino, Genoa's Commander of Port.

“Thanks to the weather conditions (heavy rain) the slicks that we were able to see from satellite photographs in recent days have largely dissolved or have been dispersed into smaller ones through treatment,” Pettorino told Italy's Sky TG24 news channel.

“They will not reach France. The situation seems to be under control.”

Local authorities had declared a state of emergency on Saturday over the slicks, the biggest of which was two kilometres (1.25 miles) long and 500 metres (1600 feet) wide.

The alert triggered fears among tourist businesses in the region which attracts 75 million visitors yearly.

The oil slicks formed after an April 17th pipeline leak at an ageing refinery near Genoa which resulted in 680,000 litres of crude spilling into the Polcevera river, which flows into the Mediterranean at Genoa.

“It was not a disaster but this was a serious incident that should not have happened,” environmental chemist Federico Valerio told Italy's La Repubblica newspaper.

“The prevention systems in place failed. The biggest damage will be to the river where the leak happened. The toxic impact of the oil will have repercussions on its ecosystem for months if not several years.

“And we will have to keep an eye on maritime micro-organisms because it is inevitable that a certain number of hydrocarbons will get into the food chain through mussels and fish.”