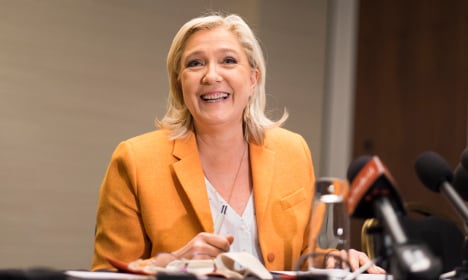 Marine Le Pen. Photo: AFP
France’s far-right leader Marine Le Pen, who famously said she wanted to “explode the EU”, is set to head to Britain in the run-up to the referendum to give her backing to the Brexit campaign.
However, those in the UK who are campaigning for the same thing don't actually want her to come.
Vote Leave co-chairman Gisela Stuart penned an open letter to Home Secretary Theresa May on Friday, asking for Le Pen to be barred from crossing the channel.
She wrote that Le Pen “has previously made many divisive and inflammatory comments, including comparing Muslims praying in the street to the Nazi occupation of France”.
“Accordingly, I urge you to exercise your powers under immigration legislation to refuse her admission into the country if and when she attempts to visit the UK.”
May has banned over 200 people from British shores since 2010. These included 84 hate preachers, 61 who posed a threat to national security, and 72 who were considered to be “not conducive to the public good”.
She told British media, however, that she does not comment on individual cases.
'No one seemed to be offended by Obama'
On Monday Le Pen hit back saying no one seemed to be upset by Barack Obama's recent trip to the UK to try to influence the Brexit debate.

“I’m surprised she [Gisela Stuart] didn’t say anything about Barack Obama coming to the UK to interfere in British affairs. I am not going to interfere.

“Barack Obama came to threaten Britain and no one seemed to be shocked at all.

If I go it would be to talk about the need for the people to decide for themselves rather than the European Union.

Le Pen is France’s most powerful Eurosceptic and is backing Brexit in the hope that it could trigger a similar referendum in France, and then her dream a “Frexit”.
Her party spokesperson said she is planning to cross the channel in the next few weeks, leaving plenty of time before the June 23rd referendum.
The leader of the anti-EU National Front party, who is also an MEP, famously said in the run-up to the last European elections that her desire was to “explode the EU”.
“How to improve the European Union? By making it collapse…. I expect one thing only from the European system and that's for it to explode,” she said.
Although her trip to Britain to back Brexit might not be welcomed too kindly by the likes of fellow anti-EU politicians like Ukip’s Nigel Farage, who has repeatedly tried to distance himself and his party from the French party he labels as anti-Semitic.
It is not quite sure what Le Pen will do on the campaign trail in Britain, given her lack of English, but no doubt it will draw plenty of attention.
A poll released last week revealed that Le Pen’s compatriots may be changing their views towards a Brexit as the crunch referendum approaches.
While some 52 percent can see it happening, more interestingly six out of ten actually want Britain to remain in the EU.
That’s in stark contrast to previous polls that suggested a majority of French people – even more than the percentage of Brits – were in favour of the UK leaving the EU.
,