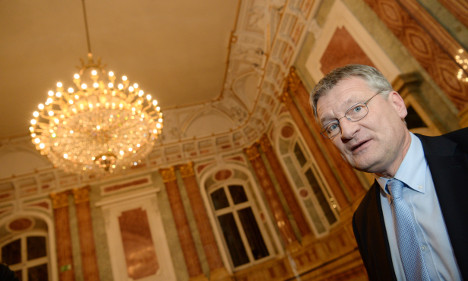 “We can have a common currency with the Netherlands, Austria, Finland or Baltic states. They have similar cultures of stability like ours,” Jörg Meuthen, the party's co-leader, told Frankfurter Allgemeine Zeitung in remarks to be published in Monday's edition.

“But the French have a different one, not to mention the Italians, Spaniards, Portuguese and Greeks. They don't want austerity at all,” said the co-leader of Alternative for Germany, which was formed three years ago as an anti-euro party but is now running mainly on an anti-immigrant platform.

Asked if his party wants France ejected from the eurozone, the AfD's deputy leader Alexander Gauland said: “No one wants to throw France out. But France is certainly a political problem. And for that I have no solution.”

He told the daily that it was good in principle for France to share the common currency, “but if it will not or cannot afford that economically, then one must find other structures.”

The AfD scored between 12 and 24 percent in three key state elections in March. It is now represented in half of Germany's 16 state assemblies as well as the European parliament and is hoping to enter the national parliament in elections due late next year.

France, the eurozone's second biggest economy, has been struggling to bring down high unemployment and national debt.

Its public debt, which has grown since the 2008 financial crisis and currently stands at around €2.1 trillion ($2.4 trillion), is set to go on increasing this year and next.

The jobless rate in France is around 10 percent and rising, while it is falling in other large European economies.