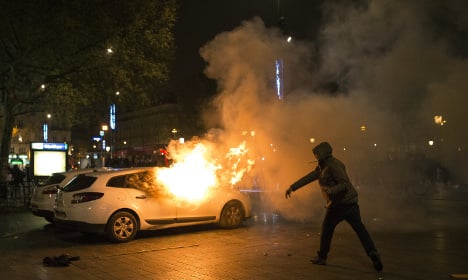 A police car set on fire at Place de la Republique during the demonstration. Photo: AFP

Police fired teargas to disperse a group of around 100 people who tried to break through police lines around the Place de la Republique, where protesters have been holding nightly rallies for the past three weeks, the police said in a statement.

A police car was torched during the clashes which erupted shortly after midnight, the statement said, adding that 12 people had been arrested for participating in an illegal gathering and throwing projectiles.

No injuries were reported.

Over the past few weeks, there have been several such flare-ups on the sidelines of the youth-led “Nuit Debout” (Up All Night) gatherings, which began on March 31 to protest the government's proposed labour reforms and have since grown to encompass a range of grievances, from the plight of migrants to tax evasion.

The latest arrests bring to nearly 50 the number of people detained around Place de la Republique since the start of the “Nuit Debout” movement.

Police warned of the “renewed, and worsening acts of violence” after the sit-ins, which have been likened to the 2011 Occupy camp on Wall Street and the anti-austerity Indignados movement in Spain.