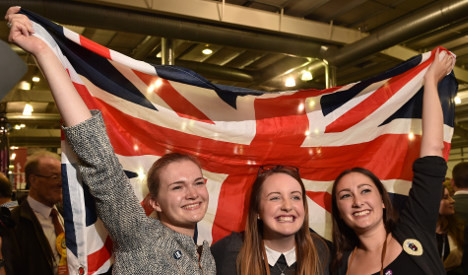 Britain’s upcoming referendum on whether to remain in the EU will have a huge effect on the 2 million Brits living in Europe – and many of these expats have a right to vote. But will they, and if so, how? The Local surveyed 2710 people across Europe to find out what these expats were thinking.

In order to be able to vote in the referendum, expats need to hold a British passport and to have been resident in the UK within the last 15 years. Just under a quarter of our respondents fit those criteria. And of those who had the right to cast a vote, an overwhelming majority (86 percent) said they were planning to do so.

'Too complicated to register?'

As to those who were not planning to vote, the main reason for abstaining (selected by 49 percent of the non-voters) was that it was too complicated to register. Meanwhile, 11 percent felt that their vote did not matter, while seven percent didn’t think they would be affected by the outcome of the referendum and a further seven percent did not understand enough about the issue.

But not everyone who intends to cast a ballot is registered with only 75 percent already signed up – and of the remaining 25 percent, a worrying majority (68 percent) said they did not know how to. Here's how.

If the referendum is as close as its shaping up to be, then the tens of thousands of votes from expats living in Europe and beyond could be significant in keeping Britain in the EU.

James McGrory, Chief Campaign Spokesman of Britain Stronger In Europe, said: “This survey shows the overwhelming consensus among Brits living abroad for remaining in Europe. As a full EU member, British people can travel, live and work freely across Europe, and they’re entitled to free healthcare if something goes wrong.

“If we left, no-one can guarantee that would continue. The Leave campaigns’ plan for Britain – to pull the UK economy out of the single market altogether – could see every British ex-pat’s automatic right to live abroad thrown into doubt”. 'If you can vote, please do so'

British expats also have a role to play, not just in voting but promoting the benefits of being a member of the EU.

Bob Lewis, the President of the Franco-British Chamber of Commerce in Paris, urged those who could vote to do it.
“My wife and I are British, I came here for work and have been resident in France for 22 years, I brought up my family here and yet we don't think of ourselves as French, we all think of ourselves as European,” he told The Local.
“If you have the right to vote, please do so, you have a better understanding of how Europe works than many people in the UK and whilst we all have personal frustrations with the way the institutions of Europe work, we have at least also seen how the institutions of Britain and France work or don't work too.”
“The EU is a force for good in society and has not only kept us at peace, but brought together member states who are at widely different stages of economic and political development and helped them all to grow and mature.

When contacted by The Local, a Vote Leave press officer said she was not in a position to comment on expat voters or the impact of the referendum on Brits living abroad.

'Brexit would mean we become foreigners'

A spokesperson for the Better Off Out campaign, who did not wish to be named, said that their group hadn't had any contact with British expats.

“I can't make a judgment on how expats would be affected by the referendum result – individuals can make their own minds up. We are concentrating on making a positive case to all voters and hope that those who wish to vote will recognize the benefits for the UK.”

However, some 58 percent of voters said they would be trying to persuade others to vote in a certain way – so don’t be surprised if you find the referendum an increasingly popular topic among your expat contacts. The most popular method for trying to sway their friends’ votes was in conversation (84 percent), while 46 percent said they would take to social media to spread the word.

Christopher Chantrey, Chairman of the British Community Committee of France, pointed out that another major concern on the referendum is that many British expats in France won't be able to vote at all.
“A Brexit would mean that we effectively become foreigners where we live – but, despite that, many of us will have no vote at all. The government should have implemented its manifesto promise of votes for life in time for us to vote in the referendum,” he told The Local. “If you've lived abroad for more than 15 years, you have no voice at all in this referendum. That's completely wrong, unfair and unjust. So we rely on those Brits abroad who have lived outside the UK for less than 15 years to register to vote and to represent those of us who have lived abroad for more than 15 years.”
He added that while many will vote with their conscience, it all boiled down to whether the UK is “economically better off and safer within a large world grouping, or outside as a loner”.
“Yes, the EU badly needs reform, and a new treaty is inevitable. But the UK should be inside, driving reform, and achieving the changes that are needed.”
A high court challenge to overturn the 15-year voting rule is currently being considered by judges and a result is expected next week.
If it succeeds there is a chance the referendum could be delayed to account for the changes that would have to be made.