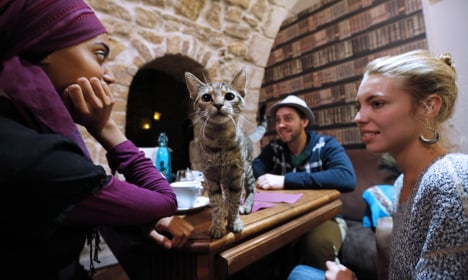 Photo: AFP
1. Visit the last ‘pissoir’
In the early 19th century many of the main boulevards of Paris were equipped with ‘pissoirs’, also called ‘vespasienne’ in French. These were public, open-air urinals aimed at giving gents a place for a quick wee if caught on the hop, rather than using trees or buildings (like many do today, unfortunately). While most of the 1,200 installations have since disappeared from the streets of Paris, there is still one left on Boulevard Arago in the 14th arrondissement. With over 2,000 people fined for urinating in public in 2014, maybe they should bring them back?
2. Find a cannonball in the wall
If you like history, or if you are just on the lookout for something that many people miss as they explore Paris, then look up as you pass by the Hôtel de Sens at 1 Rue du Figuier in the 4th arrondissement. This mansion is one of the few buildings that survived a remodeling of this area of the Marais. Just above an engraving of the date “28 July 1830” is a small but perfectly lodged cannon ball – a little remnant from the 1830s revolution.
3. Sip wine from a baby bottle
Did you know that there is a ‘glasses tax’ in Paris? Well, now you do – Parisian restaurants pay a tax for serving wine in a traditional wine glass. One cheeky restaurateur has found a way around this by serving wine only in baby bottles – or so the legend goes. Other reasons you may hear are that ‘you get drunk quicker’, ‘you can’t taste the awful wine’, and ‘the place is so crowded that normal glasses just get knocked over’. Whatever the real reason, this tourist trap (Le Refuge des Fondues in Montmartre) can be fun if you want a knees up, but don’t expect fine dining or a suited and booted waiter.
4. Learn 311 ways to say ‘je t’aime’
Paris is widely considered to be the most romantic city in the world. Who doesn’t dream of kissing their true love while on a sunset stroll along the River Seine? But if you are looking for a romantic date that’s less of a tired cliché, then the ‘Love Wall’ may be the spot for you. With 311 written declarations of love in 250 different languages, the Love Wall (set in a romantic garden on Place des Abbesses in Montmartre) is a charming and whimsical meeting place for lovers.
5. See a man stuck in a wall
As you wander through Montmartre (place Marcel Aymé, at the crossing of rue Norvins and rue Girardon), you will probably pass a sculpture of a man walking through a wall – this is the Passe-muraille (translated as “The Man Who Walked through Walls “). The sculpture was inspired by a short story by Marcel Aymé, which tells the tale of a man who lived in Montmartre and who could walk through walls. He used his power for good and bad, until one day he suddenly lost his ability and got stuck part way through a wall. It’s worth a read, and you can impress your friends with your literary knowledge as you pass by.
6. Bite into a penis baguette
The Marais has a reputation for being fun, fashionable, trendsetting, and gay. All of these are brought together in a popular little boulangerie that is run by two brothers and called “Legay Choc”, 45 Rue Sainte-Croix de la Bretonnerie in the 4th arrondissement.

READ ALSO: Ten things you didn't know about Gay Paris
Their penis-shaped bread is the talk of the town, but it is not only this ‘special form’ that draws the crowds. The sandwiches, cakes and goodies are all delicious – the willy is a gimmick for sure, but it’s not the only reason they are highly regarded.
7. Visit the pest shop from Ratatouille
Have you ever seen Ratatouille, the Disney/Pixar film about a chef rat in Paris? Do you remember the scary shop with dead rats and rat traps in the window that his dad shows him to warn him about humans? Well, it’s real! It’s called “Maison Aurouze” and was opened in 1872. Located on 8 rue des Halles, and underneath the sign saying “destruction of nuisance animals”, the shop window really does resemble its depiction in the film. It is pretty central, and you can stop by as part of a walk around the bustling heart of Paris. There are actually quite a few of these shops around Paris, but this is probably the most graphic of them all – Remi’s dad chose well.
8. Enjoy a cup of tea surrounded by cats
The Café des Chats is a café located 16 rue Michel Le Comte in the Marais, where a dozen rescued cats live and interact with the café’s patrons. The cats all have a social nature, and accept that the public at large enter into their home for tea and cakes. If you are a cat person and want to be in their company, feel free to drop by and have a cuddle while you enjoy a hot chocolate and tasty dessert.
9. Visit the world’s oldest pet cemetery
The cemeteries of Paris are tourist attractions, which you might find strange enough, but then they also have the ‘Cimetière des Chiens et Autres Animaux Domestiques’ (the ‘cemetery of dogs and other domestic animals’) in Asnières-sur-Seine. This is the oldest pet cemetery in the world and was opened in 1899. Here you will find graves of dogs (including a WWI trench dog with the inscription “He saved the lives of 40 people. He was killed by the 41st.”), cats, horses, sheep, a monkey and a hen. Reading the testaments, and understanding the companionship that these creatures brought to their owners (yes, even the hen) is heart wrenching.
By Beccy Morlot
Enjoy this list? Be sure to check out the ten Paris streets you just have to walk down.
All facts courtesy of the folks over at Smarter Paris. Check out their website here to find out more about their app.