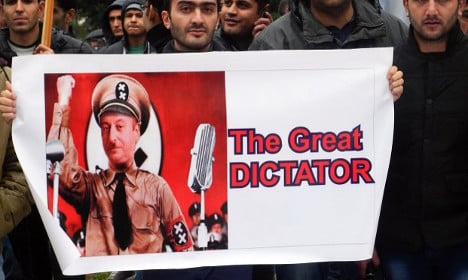 Azerbaijan dictator Ilham Aliyev, is not happy with Bourg-lès-Valence.
Bourg-lès-Valence is a quiet town with a population of less than 20,000, located in the Drôme department in southeastern France.
It's a picturesque town, known for the Saint-Pierre cathedral, its 600-seat theatre, and the Château des Confolens that dates back to 1091.
But on Thursday, trouble brewed in Bourg-lès-Valence with the surprise arrival of a court bailiff from Azerbaijan who was looking to have a few words with the mayor and to give her a summons.
The problem? Ever since 2014, Bourg-lès-Valence has been building up strong links with the town of Shusha of the de facto independent Nagorno-Karabakh Republic, part of Azerbaijan.
The two towns signed a friendship charter and aimed to build cultural links. The mayor of Boug-les-Valance Marlène Mourier has visited Shushu twice to meet local officials. (Bourg-lès-Valence: Photo: Florian Pépellin/WikiCommons)
And Azerbaijain isn't impressed with the connection. Indeed, the whole region of Nagorno-Karabakh has been a point of irritation for Azerbaijan ever since it came under the control of the self-proclaimed Nagorno-Karabakh Republic in 1992. The bailiff's visit was an attempt to get the French town to cut ties with Shusha and to forbid French officials from ever visiting, reported the France Bleu newspaper.
The move, however, appears to have had the opposite effect.
Mayor Mourier dismissed “attempt at intimidation by a foreign state on French territory”.
She said: “We continue to have friendly relations with this city, and the friendship charter will be maintained. In fact, all this reinforces my determination,” she told the paper.
“This says a lot about the methods of a repressive regime that wants to stifle dissent. But here we are in France!” she told Le Figaro.
She later tweeted: “The dictator Aliev doesn't intimidate me!” referring to Ilham Aliyev, who has been the President of Azerbaijan since 2003.

For their part the Azerbaijan embassy said it was aware that an official had been sent to Bourg-les-Valence with a spokesman saying French towns shouldn't have connections with a place that is not recognized by France.