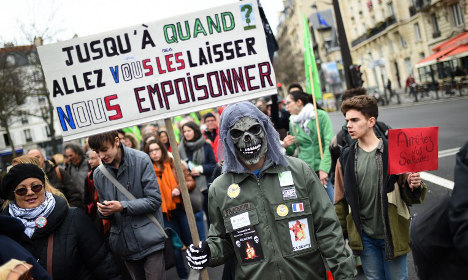 The map released by Générations Futures was published on Thursday and is based on where the victims of pesticides are in France.

The aim was to make sure “everyone understands the gravity of the situation” in France.

The issue is regularly in the news in France, Europe's top user of pesticides with 80,000 tonnes being sprayed on crops each year.

The map below shows the areas where people have been affected. It was based on the testimonies of hundreds of people who say they have been adversely impacted by pesticides being used near their homes.

The anonymous testimonies included accounts of headaches, fatigue, and coughs, all ailments attributed to the use of pesticides nearby.

The organisation claims scores more are lining up to alert them so there may be many more points to add to the map.

It reveals that much of France is affected by the phenomenon, perhaps hardly surprising given how much of the countryside is dedicated to farming. Swathes of the centre of France, where agriculture is less important and the populations are lower, appear to have been largely spared.

The map suggests those living near cereal farms and the country's wine growing areas were at greatest risk, given the reliance on pesticides.

Victims talked of how farmers in the fields would wear protective masks when spraying their crops with pesticides while on their other side of the fence children would play in their gardens with no protection whatsoever.

“We remained locked in our homes during the spraying hours,” said one woman from southwestern France.

Others spoke of how farmers and local authorities refused to listen to their concerns.

“The aim is to show the reality of the impact on professionals and local populations so the government takes the matter seriously,” said spokeswoman for Générations Futures François Veillerette.

She stressed that exposure to pesticides is particularly dangerous for young women and children.

A study earlier this year by the same organisation revealed how up to 30 different pesticides were found in homes near farms that grew vineyards, orchards or cereals.

Another previous study found similar traces of pesticides in the hair of school children in agricultural areas.

“Everything must be done so that they are not exposed to these products. [Pregnant women and children] are the people that must be protected as a priority, it is a public health issue.”

The organisation claims that the health costs of pesticides around Europe represent around €120 billion.

France's efforts to cut pesticide use have hardly been laudable. Last year the government delayed a plan to lave the use of pesticides by seven years, basically because it wasn't working.

“France had set a voluntary target of halving pesticide use in the decade to 2018 but it has in fact risen,” Reuters reported at the time.

The government planned to introduce binding targets to oblige farms to reduce pesticide use, but farmers objected saying their crops would be exposed to disease and insects.