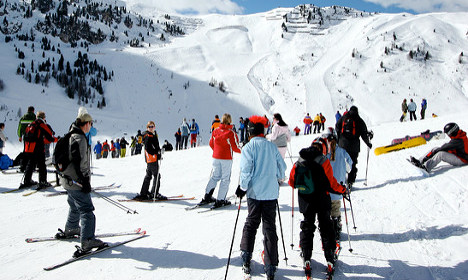 The 53-year British woman, who has not been named, died on Wednesday afternoon at the resort of Flaine in the Haute-Savoie region of the Alps.

She collided with a snowboarder on a blue ski slope called La Serpentine – suitable for beginners and intermediate skiers – at around 1pm, reported the local newspaper Dauphiné Libéré.

The cause of the woman’s death is not known, nor are the actual circumstances of the collision.

Images published in La Dauphiné Libéré show paramedics treating her at the scene with “accident” flags stationed around them to warn other skiers.

They were unable to revive the victim.

The snowboarder, whose nationality is unknown, was left with a minor wrist injury, reports say.

A specialist mountain police team from Chamonix has opened an investigation into the fatal incident, which came just days after a 42-year-old Swiss skier was killed at the same resort.

He suffered a heart attack after also colliding with a snowboarder.

It’s been another black ski season in the Alps with the number of deaths on the slopes steadily rising.

The victims have included several British nationals, such as one woman who died on a blue ski slope in the resort of La Plagne after hitting a tree.

Weeks later a British man fell 150 metres to his death at the same resort.

Last week a 10-year-old boy died whilst skiing at the resort of Orcières Merlette after hitting a pylon.

Skiers have also been killed by several fatal avalanches including one which killed two school children in the Deux Alpes resort in January.