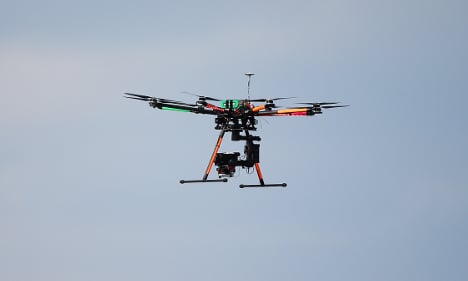 Photo: AFP
The pilot of the plane, which was carrying 108 passengers, reportedly spotted the drone on Wednesday afternoon while preparing to land at the Charles de Gaulle airport in Paris, according to reports.
He told authorities after landing that the drone had been flying around 2,300 metres above the town of Magny-en-Vexin, in the département of Val-d'Oise (see map below). The plane, en route from Dublin, was about 50 km from CDG airport.
He reported that the Airbus A320 passed within 150 metres of the drone, reported Europe 1.
An investigation has been opened. Photo: GoogleMaps
In February, the pilot of an Air France Airbus A320 was forced to make an emergency manoeuvre to avoid a drone.
The drone passed five metres under the plane's left wing as it was at 1,600 metres altitude on its approach to Charles de Gaulle.
Shop-bought micro-drones are not allowed to fly above 150 metres altitude in France, although some can reach several thousand metres of altitude.
The biggest risk to a plane would be if a drone hit a jet engine, or was sucked into one, because the batteries of drones contain highly flammable lithium.
The French civil aviation authority (DGAC) estimated at the end of last year that there were as many as 200,000 shop-bought drones in France.
Ninety-eight percent of the drones were micro-drones weighing less than two kilogrammes.
READ ALSO: Air France plane has very near miss with drone above Paris