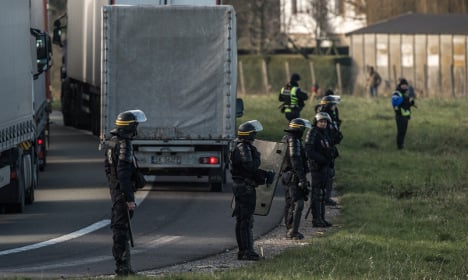 Riot police guard the motorway that leads to the port of Calais. Photo: AFP

Migrants from the Jungle camp in Calais used tree trunks and branches to block roads into the northern French port early on Tuesday as officials warned they were stepping up attempts to reach Britain.

Over the past three weeks, there has been a sharp increase in migrant attempts to stow away in the back of lorries which then board ferries or shuttle trains to England, officials say.

Such attempts have stoked tensions with the police after a period of calm following last month's dismantling of part of the sprawling Jungle camp.

“Migrants once again attempted to slow down the traffic by placing branches on the road to obstruct lorries heading to the port of Calais,” a spokesman for authorities in the Pas-de-Calais area told AFP.

“Migrants are cutting down and putting branches, and even tree trunks, on the road and they are operating simultaneously in several places.”

Police unions fear the rise in incidents heralds a difficult summer as the flow of migrants into Europe begins to pick up again and some try to reach Britain, where they believe their chances of finding work are highest.

The concern is that their numbers will be depleted in June and July because officers will be deployed to Euro 2016 football matches in the northern cities of Lille and Lens.

“I fear a rise in tensions and more and more problems because thousands of migrants are arriving in Italy, even if some are going back to Turkey. My colleagues have had enough because there is no solution,” said Bruno Noel from police union Alliance.

Another union representative, Gilles Debove, said two units of riot police were overstretched as they tried to unblock the roads.

“Everyone pretends everything is fine in Calais, but it's just not true. I'm choosing my words here, but the situation is still a hell of a mess,” said Debove of the SGP Police-Force Ouvriere union.

French and British charities say nearly 5,000 people remain in the Jungle, but the government says that figure is vastly inflated.