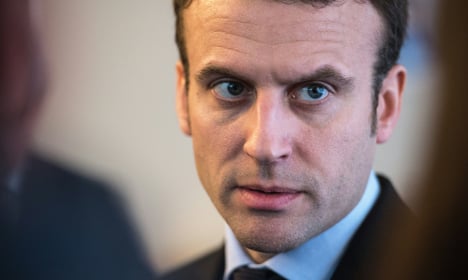 For what appeared to be the umpteenth time Emmanuel Macron, France’s whizzkid economy minister, had to be brought back into line by his own party chiefs on Wednesday.

His latest rebuke from his own boss the French Prime Minister Manuel Valls came after he had the audacity to suggest that France should scrap wealth tax.

The Prime Minister basically told Macron to close his trap and concentrate on his job of fixing the country’s struggling economy.

Suggesting the country’s richest folk should be spared a tax is not the message a Socialist government wants to be sending out right now, as it desperately tries to hold on to its dwindling support among the left.

But Macron, who has never claimed to be a socialist is no stranger to rubbing up party big wigs the wrong way.

He sent their pulses racing not too long after being nominated as a minister by suggesting the sacred 35-hour week was not sacred and could be reformed.

He then prompted many of them to start sweating profusely by suggesting France’s sacred civil servants or fonctionnaires should be given performance-related pay.

The elephants of the party lined up to lambast him. “He’s not a team player” they said.

But that seems to be Macron’s plan.

By evoking liberal economic ideas Macron is showing the voting public that although he may be a key member of a Socialist government he is not really like the rest of them. So when the ship goes down, as seems inevitable, it won’t be his fault.

You can imagine the faces of Socialist party stalwarts, when earlier this month Macron announced he was forming his own political movement “En Marche”, meaning “on the move” that he claimed was neither left, nor right.

Macron denied that it was a sign he was on the move for the Elysée, or at least not just yet.

But the more he talks and the more Hollande flounders the greater the possibility grows that Macron, could stand an outside chance of replacing his current boss in the 2017 elections. “It’s not totally impossible,” Cautres said. “French voters aspire for something new. They are just fed up with the same old politicians. French politics is moving. It feels like the end of an era.”

The end of the era of politicians hanging around for 40 years to wait their turn to become president or in the case of Nicolas Sarkozy and Alain Juppé, simply refusing to go away.

Cautres says Macron’s chances will depend on whether Hollande decided to run again for president, a decision he will make at the end of the year.

If the beleaguered president runs again, and he’s promised only to do so if unemployment drops, then Macron is unlikely to step forward and would rather bide his time.

If he steps aside however, Macron might feel that an opportunity has opened up.

The new boy on the block was supposed to have been Manuel Valls, but his popularity has been tarnished given the government’s failings.

Opinion polls regularly put Macron ahead of both Valls and Hollande in terms of popularity. One poll published on Wednesday revealed 38 percent of the population think he would be a good president. Hollande must have thrown his croissant to the floor in disgust.

But the Economy Minister would lack the support of a party apparatus, which would hinder his chances of election.

The fact France has a two round vote also hinders his path to the Elysée, as does another figure who doesn’t come from the traditional political elite.

“Whoever wins the 2017 presidential election, whether its Nicolas Sarkozy, Alain Juppé, François Hollande, will have to beat Marine Le Pen in the second round,” Cautres said.

Will Macron fancy his chances?