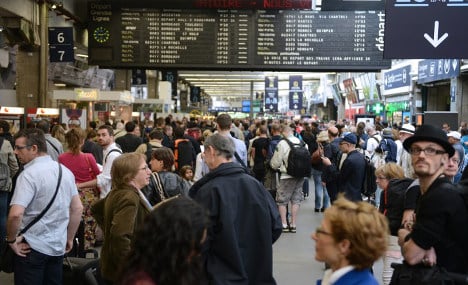 The call to strike on April 26th is the first since 2013 that is supported by all of France’s trade unions (the CGT, Unsa, Sud and CFDT) and will likely cause huge disruption to rail services around the country.

The strike is a move by unions to flex their muscles as they continue to negotiate with rail operator SNCF over working conditions and wages.

The strike will begin on Monday April 25th at 7pm and come to an end on Wednesday April 27th at 8am, although different unions may opt for different start and end times.

A strike held on March 9th this year caused cancellations and delays to services around the country, with TGV and regional Intercity services badly hit.

Some Eurostar trains were also cancelled and commuter services in Paris also hit.

The walk-out on April 26th promises to be observed by even more rail workers.

“April 26th will be a new stage of mobilization. Nationwide protests, without a strike, are also scheduled to take place on May 10th,” said Thierry Nier, a spokesman for CGT-Cheminots.

He warned that unions could step up their industrial action through the spring and the summer if SNCF bosses ignore their demands during negotiations, which will run on until May.

Up until now, it appears they have not been going too well.

SNCF will issue a warning on the eve of the strike detailing how rail services will be affected, but it might be wise not to book any train travel during the period of the strike.