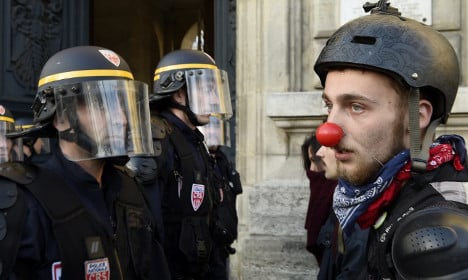 The “Nuit Debout” (which roughly translates as “rise up at night”) protests that are sweeping France are increasingly being marred by violence and police have warned the organisers not to let their peaceful cause be hijacked by troublemakers.

The “Nuit Debout” demonstrations began in March in opposition to the government's proposed labour reforms, but the movement has now embraced a range of grievances and begun to take on a revolutionary feel.

In recent days, after up to 3,000 predominantly young demonstrators have occupied the giant Place de la Republique square in Paris each evening, small groups of hooded youths have moved in, apparently determined to clash with police.

More than 400 people have been arrested since the demonstrations began.

In the latest flare-up, 21 people were detained after setting fire to wooden pallets and pelting police with objects on the Place de la Republique early on Saturday. Several police officers were hurt. Paris police chief Michel Cadot said on Saturday the violence “just cannot be accepted” and blamed the organisers “for a lack of control which is allowing these incidents to happen”.

He said while the protests were well-ordered early in the evening, after midnight “small, violent groups… try either to march, or to attack the security forces and damage shop windows or businesses, especially banks, nearby”.

“I want to remind the organisers of these gatherings of their responsibilities and ask them to stick to their commitment to stop at 1:00 am and to ensure that the participants disperse at that time,” Cadot said.

Last Thursday night a group of around 300 protesters broke away from the square and took advantage of the lack of police presence to smash up offices of the government job agency Pôle Emploi and local Franprix supermarket.

Staff at the Franprix told The Local they just raided the store looking for alcohol and “made sure they took the most expensive on offer”.

France’s #nuitsdebouts movement appears to have morphed from a desire to change politics into a quest for booze pic.twitter.com/H4Zr03aJ0d

Many demonstrations in France descend into violent clashes between demonstrators known as “casseurs” — literally “breakers” — and riot police.

The “Nuit Debout” movement — the translation of the name also has a sense of rising up against power — officially condemns such violence.

“It's a pacifist, citizens' movement aimed at opening up a new debate,” said a 24-year-old demonstrator in Paris last week, who only wanted to be identified as Gregory.

In the Place de la Republique, the participants sit and debate everything from the cause of migrants to environmental issues and the tax evasion highlighted in the Panama Papers.

While debates take place many who descend on the square do so with bags of alcohol and to someone coming out of Republique Metro station who hadn't been reading the news, the occupations would seem like just a mass outdoor drinking session.

When emotions run high, some protesters are prepared to take “direct action”. Valentine, a 25-year-old student, told AFP: “If someone makes a direct proposal to take action and no-one objects to it, people get up and do something about it.

“We're not going to wait for permission, this comes from the heart.”

She said, for example, she would happily join a group of activists in ripping down metal barriers erected to prevent migrants from setting up a camp in the Stalingrad area of northeast Paris.

And the “pacifist” nature of the movement was also called into question when Alain Finkielkraut, a high-profile philosopher seen as having pro-establishment beliefs, found himself roundly abused by demonstrators when he went to the square on Saturday.

As he fled the square with comments ringing in his ears from demonstrators who clearly felt he did not share their desire for change, the 68-year-old Finkielkraut accused his abusers of being “fascists”.

He said later he was “hounded from a square where democracy and pluralism should be the order of the day”. Former Greek finance minister Yanis Varoufakis (above) got a warmer welcome when he greeted the crowd in Paris at the weekend, telling demonstrators that President Francois Hollande was “devaluing French labour” with the job market
reforms that originally sparked the protests.

The “Nuit Debout” protests have spread to Rennes and Nantes in western France and to Montpellier in the south, although the demonstrations there have been peaceful so far.