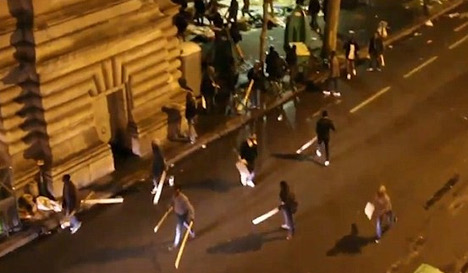 Photo: YouTube Screenshot
The video below was taken from a window overlooking the Stalingrad Metro station in the 19th arrondissement, which has long been a base for migrants passing through Paris.
In the clip, which was filmed on Thursday night, migrants can be seen hurling objects, apparently at each other, while damaging the camp they are living in.
Soon after, it becomes apparent that there are unknown assailants throwing objects at the migrants from across the street. The migrants respond by chasing them away with large pieces of wood and poles.
Riot police were quick to the scene, where they used tear gas to disperse the crowd, reported Le Parisien newspaper.
At least four migrants were injured in the melee, reported the paper. It remains unknown exactly who started the brawl, and if indeed there was any connection to the protesters who have recently been causing police trouble at the République square during night-time protests against planned labour reforms.
Stalingrad Metro station was home to almost 1,000 migrants last month, but the camp was evacuated by police at the end of March.
As has happened in the past, the migrants soon returned to camp in the area, which is not far from the Gare du Nord station, where many try to catch a train to Calais – the final camp site before potentially crossing to the UK.