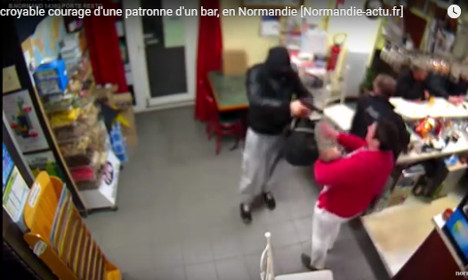 A video has appeared on the web showing how the owner of a brasserie in Champ-du-Boult, a little village in the Calvados area of Normandy, was confronted by an armed robber just as she was holding a customer’s newborn baby.

The incident occurred at around 10;30 pm on Friday night.

As the man waved a gun in her face demanding the takings from the till, the woman passed in front of the gun-toting robber whilst holding the baby and raised her hand to his face.

She then handed over the baby to the presumably petrified parents and returned to fight off the robber with the help of another customer, who was wielding a bar stool.

“You're not in a bank here, it's stupid,” she shouted. “Stop pointing that gun at me,” she also yelled.

Two shots were fired during the melee but no one was hurt as the bullets were blank. The video was posted online by regional news site Normandie Actu.

The bungling robber retreated to his scooter and fled the scene, only to return minutes later, but this time the police were there to arrest him.

“I think he understood the gravity of the situation and thought he could get away with an apology,” said the owner of the bar.