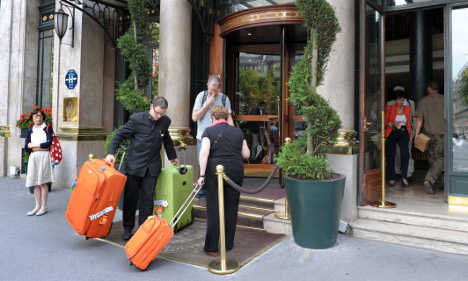 Photo: AFP
European football chiefs Uefa announced that it would use vacation rental site Abritel HomeAway as its “official fan accommodation service”, much to the anger of hotel bosses in France.
This means that during the tournament, which takes place from June 10th to July 10th in France, football fans will be encouraged to use the short-term rental service to organize their accommodation.
But hotel unions UMIH and GNC aren't impressed with the deal, and have threatened that hotels will stop paying tourist taxes over the period of the competition.
“What we want is fairness, we have to play by the same rules,” the unions said, reported Le Figaro newspaper.
The hoteliers say that “to this day, the platform has made no commitment to the ten cities hosting the tournament” when it comes to paying the taxes.
“Our professionals are fed up by this situation,” they wrote in a statement.
The union wrote that it was “totally ridiculous” that tourist tax laws were still being ignored, a full 18 months after the legislation was passed in France aimed at home-sharing platforms.
The president of the UMIH union, Roland Héguy, estimated that the boycott would mean the government couldn't collect €7.5 million in total from the hotels over the month-long period.
However, the HomeAway site, or Abritel as its known in France, has been left confused by the threatened boycott. Le Figaro reported that the platform was “actively collaborating” with the Paris Town Hall in a bid to bring in a simplified version of the taxes in time for the competition.
The tourist tax – known as the taxe de sejour in French – has proved contentious in the past after other home-sharing companies like Airbnb managed to avoid the taxes for years.
But, ever since October last year, Airbnb has been forced to charge the tax in an attempt to appease the hotel industry in the French capital, members of which were becoming increasingly concerned due to the threat to their trade.
Airbnb customers are now charged 83 cents a night for their stays in Paris, a fee that is added to their bills and given to the Town Hall.
The UMIH union noted that it was the hotel industry that was collecting 95 percent of the tourist taxes that were charged in France, despite only playing host to 50 percent of the tourists.
READ ALSO: In Numbers – How Airbnb has conquered Paris