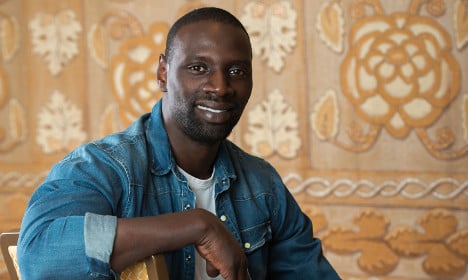 Omar Sy, the star of "Chocolat." Photo: AFP
Born in Cuba to African slaves, Rafael Padilla battled racism to become the toast of bourgeois Paris, feted by the rich and powerful for his performances as “Chocolat the clown,” France's first black celebrity.
Almost a century after he was laid to rest in a mass grave in the French capital, his largely forgotten story is being told in the North American premiere on Monday of Roschdy Zem's “Chocolat.”
It is a bold choice to open COLCOA, the world's largest festival of French film, as it challenges audiences to consider whether Hollywood's notorious diversity problem is also an issue in France.
The US film industry has been facing a very public backlash over its lack of prominent ethnic minority stars, exemplified by February's Oscars, which featured no black nominees for acting awards for the second year running.
In marked contrast, a record number of ethnic minorities competed in major categories at France's own annual industry prizegiving, the Cesars, this year.
Underlining America's diversity problem, the Center for African-American studies at the University of California, Los Angeles published a damning “Hollywood Diversity Report 2016” in February.
It found that ethnic minorites claimed just 12.9 percent of lead roles in 163 films released in 2014, down from 16.7 percent the year before and 15.1 percent in 2012.
But minority filmmakers and actors involved in features being shown at the nine-day COLCOA festival in Los Angeles believe the Cesars' relative diversity may be masking the true situation in French film.
Taboo
“Chocolat” is led by rising star Omar Sy, the first Frenchman of African descent to win a best actor Cesar for his role in 2011's “The Intouchables.”
Sy has managed to parlay his popularity in the francophone world into a Hollywood career, first in sci-fi adventure “X-Men: Days of Future Past” in 2014 and then with a role in 2015 dinosaur blockbuster “Jurassic World.”
The 38-year-old points to Denzel Washington, Wesley Snipes, Dwayne Johnson and other ethnic minority actors who have been able to make it big despite the bleak picture outlined by UCLA's diversity report.
Non-white actors have traditionally been denied leading roles in certain genres, like romantic comedy and superhero movies, but Sy says studios producing global blockbusters, at least, are increasingly trying “to pluck people from all areas of the world.” Sy, director Roschdy Zem, and actor James Thierree, unveil a commemorative plaque for “Clown Chocolat” at the Mandarin Oriental hotel in Paris. Photo: AFP
Shot on a budget of €18.5 million ($20 million), “Chocolat” has been lauded by critics for shining a light on a subject which is more taboo in French society than in Hollywood.
A review in the Hollywood Reporter said the film deserved “plenty of credit for using this kind of commercial vehicle to look French racism in the face and call it what it is.”
In France it is forbidden by law even to collect statistics referring to “racial or ethnic origin,” so any discussion of diversity is necessarily anecdotal, but Sy suspects the problem is as big as in Hollywood.
“We have a track record of actors and directors from diverse backgrounds being given awards but if you look at production as a whole, they are not there,” Sy told AFP at COLCOA.
Death threats
“Chocolat” writer and director Zem felt the problem acutely when casting around for big names to bolster his film, and only Sy emerged as a credible choice.
“I needed a recognized actor of colour and there was only one name in the frame,” he told AFP.
COLCOA's focus on diversity is evident in its world cinema section, which hosts two of the most talked-about films in Muslim countries.
Directors and producers across the world protested against Morocco's ban of Nabil Ayouch's French-Moroccan drama “Much Loved,” a candid take on prostitution which earned its lead actress Loubna Abidar death threats.
Ayouch says that even when minorities get prominent roles in French cinema, it is often just to typecast them, to play to stereotypes that serve as crude plot devices, reinforcing prejudice.
“If we want to present a son-in-law to parents, we will make a joke out of it by making him black or Arab,” he says, referring to last year's comedy “Serial (Bad) Weddings.”
“A cop will be black or Arab if he lives in the housing projects.”
Mohamed Hamidi, whose comedy “One Man and his Cow” tells the story of an Algerian farmer dreaming of winning a Paris agricultural show, believes the status of minorities in French cinema is improving, however.
His film, he says, follows a strong slate of recent French features led by black or North African actors, including “Asterix & Obelix: Mission Cleopatra” (2002), “Welcome to the Sticks” (2008), and “The Intouchables.”
“You only have to look at the big successes of the last 20 years… I think the French are largely there,” he says.