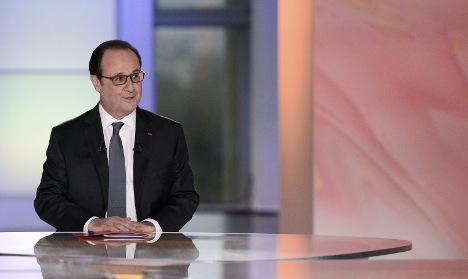 Photo: AFP
Questioned by four members of the public on live TV, Hollande insisted he would pursue attempts to reform the labour market and said he wanted to be judged on his efforts to reduce stubbornly high unemployment, which has dogged his four years in office.
“I have undertaken policies which are producing results now and which will continue to produce results,” he said. “I ask to be judged on the issue of unemployment.”
The jobless rate in France is around 10 percent and rising, while it is falling in other large European economies.
Opinion polls on Thursday showed nearly 90 percent of voters take a negative view of Hollande's presidency.
Protesters demonstrating against the labour law reforms clashed with riot police in Paris and several other cities.
A crowd of around 1,700 massed in the capital in the afternoon, and police said seven officers and four protesters were injured in the ensuing scuffles.
Six people were arrested after protesters started throwing chairs and bottles at police, who responded with tear gas. Four youths were also arrested on the outskirts of Paris.
As Hollande's interview came to a end, a group of around 300 demonstrators said they would march on the Elysee Palace, but were stopped by law enforcement.
“You say that France is doing better but like many French people, we struggle to make ends meet. Today we are stuck… for me, France is sick,” said protester Antoine Demeyer, a bus driver.
The protests were the latest in a series of demonstrations against reforms the government argues will cut unemployment, but critics say are weighed heavily in favour of employers and will erode job security.
Hollande rejected calls for the measures to be withdrawn, but conceded that “corrections” would be made to the draft law in parliament.
'Things are improving'
Hollande's popularity ratings are among the lowest ever for a post-war French leader, but he insisted progress was being made.
“Things are better — there is more growth, there are fewer debts and fewer taxes. Competitiveness is up,” he said.
“That is what I have done in the last four years and that is why I am going to pursue it to the end.”
On the international front, he said France had played an “exemplary” role in efforts to end the five-year war in Syria.
“France has supported the Syrian opposition, it has fought Daesh (another name for the Islamic State group), and France wanted to intervene when chemical weapons” were being used, Hollande said.
“France has been exemplary on Syria.”
Polls released Thursday made grim reading for Hollande.
One for BFMTV showed 87 percent of voters had an unfavourable opinion of his four years at the helm, and he did not fare much better among supporters of his own Socialist Party, with 69 percent backing that view.
Another poll, for Le Parisien newspaper, showed 69 percent of people will not change their minds even if he manages to reduce the jobless total.
Three-quarters of respondents said they believe he should abandon hopes of standing for a second term “to allow the Left to find a better candidate”.
The 2017 presidential race is impossible to call at this point because the main contenders are yet to be selected.