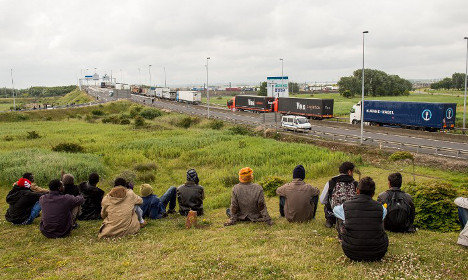 The victims were attacked at an autoroute rest area on the A26 motorway near Chocques, according to reports in the French press.

The local Voix du Nord newspaper quoted a police source who said the 20-strong group of Eritrean migrants armed with sticks and rocks mistakenly took the victims for Afghan traffickers.

One of the victims was attacked as he pulled into the rest area in a utility van while the other was already parked up. The victims were punched and struck with sticks numerous times, according to the reports.

In a Facebook post, one of the victims said he was attacked in his car and posted images of the windows smashed. According to local prosecutors the attack, which occurred last week, illustrated the “rivalry between different migrant groups in the battle to take control of motorway rest areas, which are the main points for trafficking refugees to the UK.”

“It’s the first time we have seen such an act of violence towards motorists,” a police source told Le Figaro newspaper.

The victims have pressed charges but so far none of the attackers have been identified.

British hauliers unions have long raised fears about violence towards drivers, with numerous reports of migrants armed with sticks and knives trying to break into their trucks.

A video was posted online earlier this year that showed migrants attacking trucks on the road to the port in Calais.

It coincided with the eviction of hundreds of migrants from the Jungle camp, which increased tensions in the area and led to even more desperate attempts to reach the UK.

Videos have also been posted online appearing to show lorry drivers attacking migrants after finding them in their vehicles.