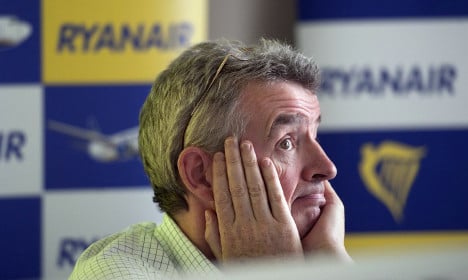 A representative of the leading French air traffic controllers union told The Local that safety and not Ryanair’s profits were their priority after recent complaints from O’Leary that his airline’s takings had nosedived by millions thanks to strikes in France.

“What matters to us is how secure the air traffic control system is in France,” Stephane Lonni, from the SNCTA union, told The Local. “Besides, Ryanair’s profits have never been higher.”

“The fact that there have been over 40 strikes in France is a symptom of a problem that clearly has not been resolved.

“In France we have some of the oldest equipment to work with and a serious problem with a lack of staff,” he added.

“We don’t want to strike. We prefer to find a compromise. It’s a last resort that will we use if we have to.”

Unions' main beef is with a fall in the number of staff that is placing ever greater pressure on the controllers at a time when the amount of air traffic continues to rise and aviation security is a major concern.

The Irish no-frills airline forecast this week a hit of between €10 million and €20 million ($11.4 million and $22.8 million) in the fourth quarter of its financial year, or three months to March 31st. While part of that drop was due to the Brussels terror attacks, O’Leary said the strikes in France have played a key role.

O'Leary was scathing of the frequency and “cynical” timing of industrial action by air traffic controllers in France during peak holiday periods which, he said, caused untold inconvenience to passengers across Europe.

“The last strike ten days ago had nothing to do with air traffic controllers at all; they just don't like the new social legislation being produced by the French government,” he said.

“That's fine but don't strand everybody else across Europe,” he added, reiterating his call for a ban on air traffic controller strikes.

Ryanair wants the public to join their campaign, “Keep Europe’s Skies Open“, which was launched last year. With enough support they claim they can force Europe to take action against the French.

“O’Leary is a provocateur and he is just trying to turn the public against us,” said Lonni. “he tries to make us to out be like spoiled children.”

“A lot of the public don’t understand we have to take action. They are just concerned about their holiday being ruined,” he said.

“We know we will be unpopular. It’s a complicated situation and we try to explain to people why we have to strike, but they don’t understand.”

With SNCTA and other unions still battling with French aviation authorities over their grievances O’Leary can expect his profits to be hit even further and passengers around Europe can expect more disruption.