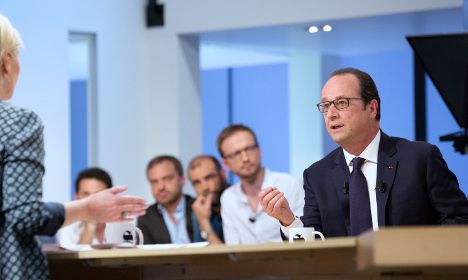 Hollande is clearly a man who is more of a “pint half-full” than “half-empty” kind of guy.

Given how the public feel about him and have done for a long while, he would be forgiven for hiding away in what appears to be the beginning of the end of his time at the Elysée Palace.

But the president is battling on, even if it all appears in vain.

As he prepared to face the public in a TV question-and-answer session on Thursday a new poll was released which revealed almost nine out of 10 French people have a negative view of his time as president.

That's pretty damning and even an impressive performance on Thursday will do little to change that, especially as previous TV interviews have gone down like a lead balloon.

But the results of the survey suggested Hollande might as well as cancel the TV Q&A and instead spend some time on thinking what he could do when his five years at the Elysée come to an end, as they surely will do in May 2017.

The poll for BFMTV showed that 87 percent of respondents had an unfavourable opinion of his four years at the helm, and he did not fare much better among supporters of his own Socialist Party, with 69 percent backing that view.

Indeed it is his unpopularity among left wing voters, who believe he has betrayed them and instead jumped into bed with big business, that will mean getting elected in 2017 will be a challenge that looks increasingly impossible.

Thursday night's show will see Hollande face a 90-minute grilling from a panel of three journalists and four French voters.

The voters have been chosen to represent the issues that have dogged Hollande since he became president in 2012.

There will be a company boss, a woman whose jihadist son has gone to Syria, a business student who writes a left-wing blog and a bus driver who votes for the far-right National Front (FN).

Hollande, who is believed to be preparing to stand for a second term in next year's presidential elections, has focused on trying to reduce stubbornly high unemployment, the thorniest issue of his time in office.

He has already vowed to not go for re-election if he can't reduce unemployment. While most economic forecasts predict the jobless rate will fall, it may come too late and the drop will likely be too insignificant to convince voters to give Hollande a second stint in the Elysée.

And in another poll for the Paris daily Le Parisien, that will dampen Hollande's spirits, 69 percent of people will not change their minds even if he manages to reduce the jobless numbers.

And three-quarters of respondents believe he should abandon hopes of standing for a second term “to allow the Left to find a better candidate”.

Hollande's ratings briefly zoomed up to 50 percent, the best since 2012, following his hardline response against jihadists after the Paris attacks in November.

But overall he has been far from popular as president.

Even 12 months political experts were telling The Local he would need a miracle to be re-elected.

But now as protests against labour reforms continue, unemployment is still on the up and his embarrassing climb down over a controversial and doomed idea to strip terrorists of their French nationality, Hollande has even less going for him now than last year.

It's all too far gone, for 90 minutes on TV to make a difference.