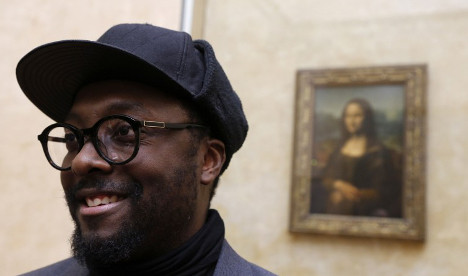 The singer will.i.am revealed to the world on Tuesday the results of his most unlikely collaboration yet, after he was allowed to spend an “awesome” night inside the Louvre museum.

The Black Eyed Peas frontman shot a video of his song “Smile Mona Lisa” in the Paris landmark as a tribute to his hero, Leonardo da Vinci – and found the place “so cool” he decided to make a documentary about it.

In the music clip will.i.am appears in some of the museum's greatest masterpieces, including as a gun-toting revolutionary in Delacroix's “Liberty Leading the People”, while singer Nicole Scherzinger slips into the clothes of the enigmatic Mona Lisa.

Actor, philanthropist and tech evangelist will.i.am, who is Intel's director of creative innovation as well as the man behind the Puls smartwatch, told AFP he saw many parallels between Da Vinci and today's tech pioneers.

“Leonardo (and other Renaissance artists) were the tech of those times… they were engineers, inventors, they were into astronomy, anatomy and they painted for leisure,” he said.

In the web documentary he shot, called “will.i.am at the Louvre”, he raves about the Old Masters in what he calls the “greatest museum on Earth”.


will.i.am au Louvre (will.i.am at the Louvre) par Off

But it was a piece of monumental 18th-century bling which really floored the singer.

He marvelled at the technology of Claude-Simeon Passemant's gold and silver “Pendulum of the Creation of the World”, made in 1754, which not only told the time but showed precisely how the Earth was tilting on its axis.

“That is the best thing I've seen,” he said.

“This place is magic, inspirational,” the rapper had said earlier as he was chased through the corridors of the museum by a throng of camera crews in a scene that could have come straight from Fellini's “La Dolce Vita”.

After agreeing to follow 20-year-old fan Ousman Cissokho on Instagram, he told reporters that the “one sad thing” was the lack of black faces on the museum's walls beyond its Egyptian collections.

“When people see the (music) clip (of the singer inside Vermeer and Rembrandt paintings) the first thing they do is laugh,” the hip hop star said.

“The reason they are laughing is because we have never… seen Africans or people of African descent in a masterpiece. And that is because at some point in time black people were a piece of property of their masters.”

But technology brought hope for change, he said, and one day museums like the Louvre may display iPhones alongside Rembrandts.

“In 100 years from now we will all agree that Apple is a company that makes art and provides tools for artists. I would inspire young kids to be inspired by Apple and be like Apple.

“Right now my biggest inspiration is a company, a group of artists and dreamers called Apple,” he added.