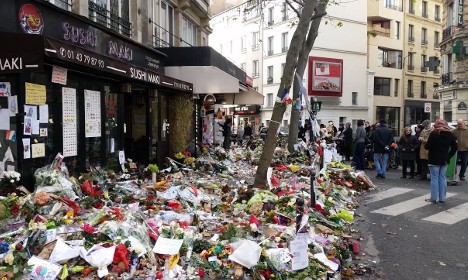 A makeshift vigil at the Belle Equipe restaurant where 19 died. Photo: The Local
Brothers Khalid and Ibrahim El Bakraoui, the suicide bombers who hit Brussels last month, obtained the weapons and explosives for those attacks and for November's carnage in Paris, the Islamic State (Isis) group said Wednesday.
The English-language edition of the jihadist group's magazine Dabiq says of Khalid El Bakraoui: “All preparations for the raids in Paris and Brussels started with him and his older brother Ibrahim.
“These two brothers gathered the weapons and the explosives.”
If the group's claim is proven, it would mean the brothers played a more prominent role in the Paris attacks than previously thought.
The magazine also says Najim Laachraoui, who blew himself up with Ibrahim El Bakraoui in Brussels' Zaventem airport, had prepared the explosives for the attacks in Brussels and Paris.
Khalid El Bakraoui detonated his explosive suicide vest on a crowded metro train in the attacks which killed a total of 32 people in the Belgian capital.
Isis gunmen and bombers killed 130 people in Paris on November 13th in attacks on bars and restaurants, a concert hall and the national stadium.
The latest edition of Isis's magazine also paid tribute to Mohamed Belkaid, an Algerian who was shot dead in a police raid in Brussels during which other suspects escaped six days before the attacks on the city.
Dabiq said that although Belkaid could have escaped, “he decided to make this his final stand and to ensure his brothers a safe exit”.
The claims come as Spanish police announced that they had detained a French national suspected of heading a weapons trafficking ring that provided arms to Amedy Coulibaly, who staged a deadly attack on a Jewish supermarket in Paris last year.
In a statement, police said Antoine Denevi, a 27-year-old originally from the northern French region of Pas-de-Calais, was detained on Tuesday in the southern Spanish area of Malaga at the request of French authorities.