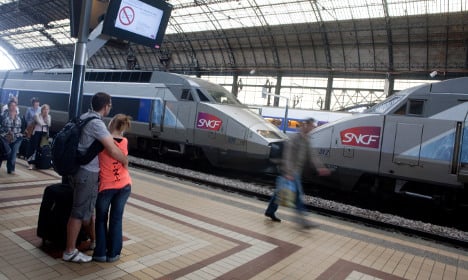 Passengers wait as a TGV high-speed train stands alongside the platform at Saint-Jean railway station in Bordeaux, southwestern France. Photo: AFP
Imagine the joy of being able to travel between Paris and Bordeaux in just two hours (currently the fastest option is 3hr14).
Well, in just over a year's time, you won't have to imagine anymore. On July 2nd, 2017, SNCF will open a two-hour (and four minutes) speedy Paris-Bordeaux option.
That's a time saver of an hour and ten minutes. SNCF has promised 18 high-speed non-stop return journeys a day on a line that is set to run more like a shuttle, with hourly trains in off-peak times, and every 30 minutes during peak hours.
There will also be a number of high-speed trains doing the same journey with just one or two stops, meaning passengers bound for cities like Poitiers, Angoulême and Libourne can also rejoice.
A commuter will be able to get down to Bordeaux before 9am, and stay until 9pm before taking the last train home. Even better news for those coming up to Paris, with the trains allowing arrival as early as 8am (and 9pm departures).
But wait, there's more. The quicker service will affect a total of 27 cities across France, meaning, for example, that a trip from Paris to western city Rennes will only take 1hr25, compared to the current 2hr04.
A trip from Paris to Hendaye, the most south-westerly town in France, will be 1hr12 quicker which means the Spanish border is just 4hr09 one way.
In fact, there will be an almost total rewrite of some 2,500 daily trips – about a third of all regional train journeys in the country.
These changes will also include a ten minute quicker trip between Paris and Nantes, and Paris to Toulouse sinking from a 5hr25 journey to 4hr09.
The overhaul will see SNCF roll out 40 new trains on certain lines and refurbishing another 24 between now and 2019 as part of a billion-euro plan.
This will also include “more ergonomic” chairs (which we can hope means they're more comfortable too) and WiFi connections aboard all trains.

By 2019, the Paris to Bordeaux line is expected to have an additional 2.3 million passengers per yer.
We can only hope that the new trains will attract some new drivers, not least considering a recent report found that between 70 and 90 regional trains have been cancelled each day in France this year, mostly due to retiring staff and unattractive working conditions.