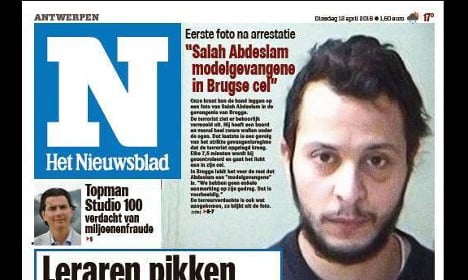 The Flemish newspaper Het Nieuwsblad published a photo of Abdeslam on Tuesday, the first up close photo of the terror suspect since his arrest last month after he spent months on the run from French and Belgian police.

The image marked a difference from the carefully coiffured man seen in the official police pictures up until now.

The man who was shot in the leg during his dramatic arrest in Brussels has grown a beard and his hair. The bags under his eyes suggest the 26-year-old hasn’t had much sleep in recent weeks. A prison source told Het Nieuwsblad that Abdeslam, thought to have played a key logistics role in the Paris attacks, was a “model prisoner”.

“He’s a very good boy and is an example to other inmates in terms of behaviour,” said the source.

“We have had no negative comments about his actions,” said the same source, adding that the French national had an “excellent appetite”.

Abdeslam is waiting to be deported to France, where he will face trial for terrorism offences in connection with the November 13th Paris attacks that left 130 dead.

He is under close watch in prison, with authorities fearing he may try to take his own life.

Het Nieuwsblad claimed that guards visit him several times each hour and he is the subject of regular body searches.

There were also recent reports that authorities want to put CCTV in his cell to keep a closer watch on him.

His lawyer has revealed that the suspect wants to cooperate with police as they continue to investigate the Paris and Brussels terror attacks, which were carried out by the Brussels-based cell.

Abdeslam has however told police he had no knowledge that attacks were being planned on Brussels.