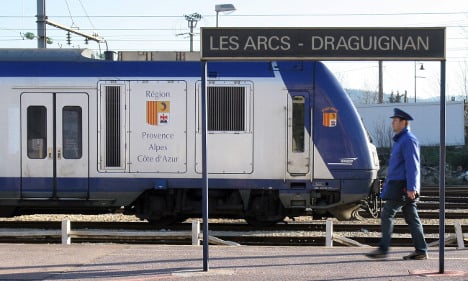 Photo: AFP
Nice Mayor Christian Estrosi, who is also the president of the Provence-Alpes-Côte d'Azur region, announced the move early on Monday morning via his official Twitter account.
Together with rail operator SNCF, he aims to overhaul the train security system in the south-eastern France region known by its acronym PACA, which includes Provence and the Riviera.
The plans include new “anti-fraud” gates at stations in the area, meaning it will be tougher to get to a train platform without an electronically scanned ticket.
The first of these gates will be installed in around a fortnight at the Arcs station in the Var département (pictured above), Estrosi said.
It's no surprise that the SNCF is taking the matter seriously, with studies showing that the company loses €300 million a year through “fraud”, or people travelling without a valid ticket.
The SNCF is slowly bringing in these gates for regional trains across France after successful test runs in Paris earlier this year.
Estrosi also promised an additional 100 security staff for public transport – 50 in Provence and another 50 in the Cote d'Azur.
The mayor is also trying to bring in a €1 ticket that can be used widely across the region.
He tweeted that residents could also expect additional CCTV footage at the region's train stations.
Estrosi was the first mayor in France to introduce security headquarters for monitoring CCTV footage, which he brought to Nice back in 2010. The city has around 1,000 security cameras, reports BFM TV.
The Riviera follows hot on the heels of Paris in the move, after officials announced last week that they'd install CCTV cameras at 70 of the most heavily frequented bus stations across the region.