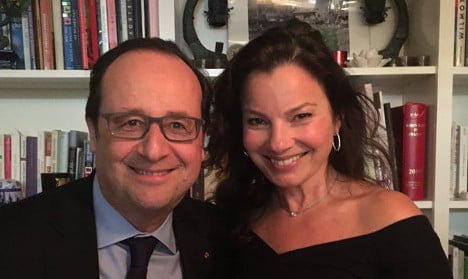 According to the picture, tweeted out early Sunday morning, President Hollande spent his Saturday night sharing a meal with the “The Nanny” Fran Drescher.

The actress, the star and co-creator of the hit the hit American 90s sitcom The Nanny, tweeted the pic with French President François Hollande at about 1:15 am on Sunday.

No other details were revealed about this alleged dinner.

The Nanny, broadcast in the US between 1993 and 1999, is also quite well-known in France, as it was shown by M6 with the title Une nounou d’enfer, or “A Nanny from Hell”.

In the show, Drescher’s character Fran Fine is a Jewish Queens native who finds herself nannying for three children from a high society family. The nanny, known for her miniskirts and her loud, grating voice, falls in love and eventually marries the husband.

Drescher is an outspoken gay rights activist as well as engaged in the domains of cancer prevention and children’s education. However, none of these issues were on the presidential agenda on Saturday, according to Le Parisien newspaper.

Although the details surrounding the dinner remain a mystery, the photo spawned a plethora of responses in the Twittersphere.

Some Twitter users expressed bewilderment or simple exasperation, while many other Tweets derided the president for seemingly having dinner with a B-list American celebrity while thousands of French citizens are protesting around the country.

“Mr. President, the French are in the streets!” “Who cares? I had dinner with Fran Fine!”

“France needs a Nanny from Hell, so Francois Hollande is looking for her everywhere.”

“Know that while you're in Rise Up At Night, François Hollande is having a soirée with Fran the legend (and nanny).”

Perhaps the dinner date was all part of Hollande's bid to boost his popularity ratings, which are at an all time low and show no sign of improvement.