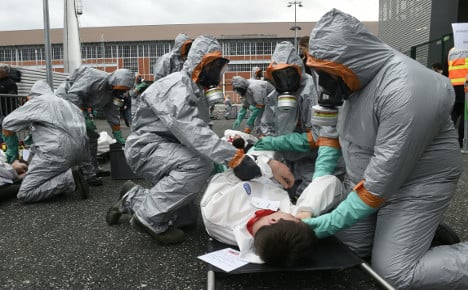 French police and emergency services prepare for an attack at Euro2016. All photos: AFP

The claim was made by Liberation newspaper, which stated that Mohamed Abrini – the Paris attacks suspect arrested on Friday – has admitted to investigators that their main target was not Brussels, but Euro 2016 in France.

Belgian prosecutors revealed at the weekend how the Brussels-based terror cell intended to launch a fresh strike in France, but attacked in the Belgian capital instead after being “surprised” by a quick-moving investigation.

With the police closing in they decided to stage coordinated attacks on Brussels airport and the Metro system, killing 32 last month.

“Numerous elements in the investigation have shown that the terrorist group initially had the intention to strike in France again,” a statement from the federal prosecutor’s office said.

Prosecutors however did not reveal any details about the planned attack on France, but Liberation newspaper claims that Abrini, who was wanted for his suspected role in the Paris attacks, confessed to investigators that Euro 2016 was the real target.

Investigators are trying to verify if there was any truth behind Abrini’s words but a separate report in BFM TV on Monday claimed that a taped conversation between one of the Brussels bombers and a contact in Syria suggested they wanted to hit France in the run up to Euro 2016 in the hope frightened authorities would cancel the tournament.

If the claim is true, it will be of deep concern to authorities in France, who are already on high alert and have long feared the tournament may be targeted.

“It’s not really a scoop to learn that the terrorists wanted to strike during the Euros. The security forces are constantly developing attack scenarios and methods to respond,” the police source told Liberation.

“If the Abrini statements are correct, it just confirms the fact that Belgium is an operational base that needs to be watched even more intensely”

In recent weeks French police and emergency services have been carrying out exercises (see photo below) involving hundreds of volunteers in preparation for a possible terror attack at the tournament. The paper also claimed that a computer seized in a raid shortly after the Brussels bombings contained information suggesting the attacks were being ordered from Syria.

Although according to Liberation, investigators have not determined who in Syria the Belgian based jihadists were in contact with.

During that raid police made the chilling discovery of 15 kilos of TATP explosives, as well as other bomb making equipment. Days later another suspect linked to the call was arrested in the Paris suburb of Argenteuil. He was found to have an arsenal of weapons in his possession.

Evidence that the terrorists at least had the means to carry out an attack similar to Paris, whether or not they had finalized their specific plans or not.

Data retrieved by Belgian police from the seized computer reportedly revealed how the cell had drawn up a list of possible attack sites in France, including the La Defense financial district and the hardline Catholic organisation Civitas, although it is not believed there were any advanced plans for these targets.

Speaking on Sunday French Prime Minister Manuel Valls said said that the new information was evidence of the elevated threat to the country.

“It's extra proof of the very high threats to the whole of Europe and to France in particular,” he said during a press conference in the Algerian capital, Algiers.

“We will not let our guard down,” he added.

Last week Interior Minister Bernard Cazeneuve and Health Minister Marisol Touraine both assisted at an exercise at a fan zone in the western city of Bordeaux which mobilized 600 fire fighters, police, army, and emergency services.

It followed an earlier exercise simulating a chemical attack at the Stade Geoffroy-Guichard in Saint-Etienne which will host four matches.

“We want Euro 2016 to take place in the best conditions and that's why we're multiplying exercises to test the systems put in place to quickly intervene in a context where the threat is extremely high,” said Cazeneuve.

The scenario chosen in Bordeaux was one where three armed terrorists were firing into the crowd waiting to enter the fan zone.

One triggered an explosion in the middle of the crowd, while another took hostages in a building, causing the intervention of the specialized police intervention unit, the RAID.

“The challenge is to know how we can support a large number of victims in a region where the hospital facilities are not of the same nature as in Paris where there is the biggest hospital in Europe.

“We have plans in place for different regions to work together.”