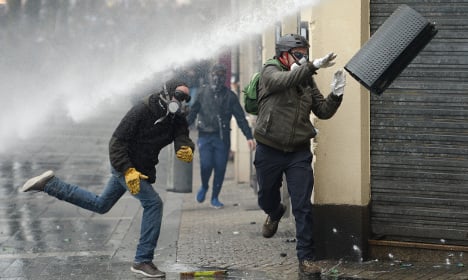 Police and protesters clashed in western Rennes and Nantes as well as Paris, leaving several injured, as demonstrations across the country aimed to keep up pressure against the reforms, which will make it easier for struggling companies to fire workers.

From Paris to northern Lille, to eastern Strasbourg and southwestern Toulouse, some 200 cities saw protests over “The Bosses' Law”, as it was dubbed on a marcher's banner in Toulouse.

“We're starting the second month (of protests),” Jean-Claude Mailly of the Force Ouvriere trade union said in Paris as the sixth in a relentless series kicked off. “We're not afraid of losing steam.”

Turnout however appeared to be far lower than a peak on March 31st when 390,000 people took part, according to police, while the total of organisers' estimates was 1.2 million nationwide.

On Saturday police in Rennes used tear gas and stun grenades in clashes with protesters, with three members of the security forces needing emergency care and unconfirmed reports of another 19 people injured.

In nearby Nantes, hundreds of youths erected barricades and threw stones, bottles and eggs at security forces who responded with stun guns and tear gas.

The labour reforms, which have already been diluted once in a bid to placate critics, are considered unlikely to achieve their stated goal of reining in unemployment, which stands at 25 percent among young people.

Socialist President Francois Hollande's government is desperate to push through the reforms, billed as a last-gasp attempt to boost the flailing economy before next year's presidential election.

Youths have been at the forefront of the protest movement, and student union leader William Martinet said the proposed legislation was a form of “social hazing”.

Many young people, including graduates, find themselves working on short-term contracts for several years after their studies, or doing internship after internship while hoping to secure a job.

The lower turnout in Saturday's protests may be partly explained by the start of school holidays in much of the country.

Anger over the reforms has spawned a protest movement dubbed “Up All Night” that is taking over French city squares, with young people gathering until dawn demanding social change.

In Paris, hundreds of people have been gathering every night since March 31st at the vast Place de la Republique.

The labour reforms are a unifying theme of the gatherings, but the Up All Night movement is broader, embracing a range of anti-establishment grievances.

They say they are drawing inspiration from the Spanish protesters known as the Indignados, who gave rise to the far-left Podemos party.

A protester said Saturday described the new movement as a “convergence of struggles” and was a sign of “the end of a system”.

Echoing her remarks was a banner reading “Game over, the people are waking up”.

The labour bill has passed the committee stage after a few more tweaks such as a clarification over when an employer can declare economic duress to justify layoffs.

The legislation is to go to the floor of parliament on May 3, and unions have called for a strike on April 28th — the third in the wave of protest actions.

While some unions have shown willingness to negotiate the reforms, others are calling for the bill to be withdrawn wholesale.

Philippe Martinez of the CGT union called for the government to “go back to square one for a real labour code that will protect workers.”