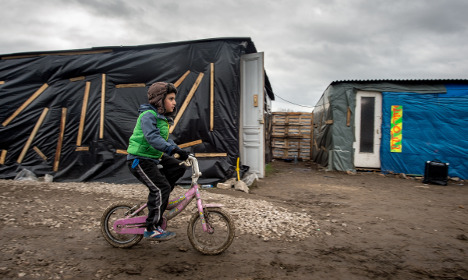 Longfield's office said charities claimed some of the children were as young as 10. Photo: AFP

England's watchdog for children urged the French authorities on Saturday to speed up processing the cases of lone child asylum seekers who may be eligible to join family in Britain.

Anne Longfield, the Children's Commissioner for England, wrote to the French government concerning an estimated 150 unaccompanied minors in a refugee camp in Calais, on the northeast French coast across the Channel from Britain.

Under European regulations known as Dublin III, child asylum seekers can have their claims transferred to another European Union country if they have relatives there.

Longfield's office said charities claimed some of the children were as young as 10, and had “fled war and fighting in countries such as Syria”.

Longfield said: “I have asked the French authorities to urgently determine which of the children in the Calais refugee camp are eligible to come to the UK, to ensure their safety and to process their applications immediately.

“It is unacceptable that at the moment some are waiting up to nine months before they learn whether or not they can come.

“The camp is an incredibly dangerous place for an unaccompanied child.”

She asked the authorities in France to establish a dedicated centre to process the children's asylum applications and for them to be addressed urgently.

“Whilst in the camp, the children have been exposed to trafficking, violence, abuse and illness,” her office said, adding that some had attempted to enter Britain illegally by hiding in trucks.

But Fabienne Buccio, head of the Pas-de-Calais prefecture, said she was “amazed” by the criticism.

“The delays of nine months mentioned in the letter have no basis in reality,” she wrote in a statement, pointing out that a British border official had been dispatched to Calais with the sole purpose of speeding up such applications.

As a result, 22 lone-children had had their claims accepted, 12 of whom were already in Britain, and more were expected in the near future, said Buccio.