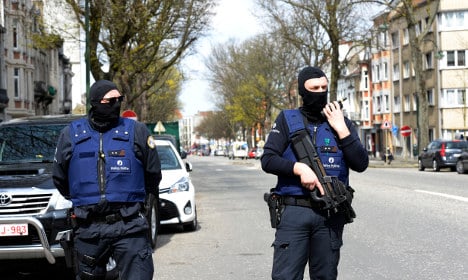 Belgian police officers stand guard in a street in Etterbeek while their colleagues search a warehouse in relation with terrorists arrests in Belgium on Saturday. Photo: AFP

The cell, which was directly involved in the November attacks on Paris which killed 130 people, had initially planned to stage a second deadly strike in France, but they changed their plans as investigators closed in.

Instead, they staged coordinated attacks on Belgium’s airport and the metro system, killing 32 last month.

“Numerous elements in the investigation have shown that the terrorist group initially had the intention to strike in France again,” a statement from the federal prosecutor’s office said.

“Surprised by the speed of the progress in the ongoing investigation, they urgently took the decision to strike in Brussels.”

French Prime Minister Manuel Valls said that the new information was evidence of the elevated threat to the country.

“It's extra proof of the very high threats to the whole of Europe and to France in particular,” he said during a press conference in the Algerian capital, Algiers.

“We will not let our guard down,” he added.

The Belgian prosecutor also said that Mohamed Abrini, the so-called “man in a hat” seen in CCTV footage from Brussels airport, who fled but was arrested on Friday, had been charged with “terrorist murders” over the Belgian bloodshed.

“The investigating judge specialised in terrorism cases has put Mohamed Abrini in detention in connection with the investigation into the Brussels and Zaventem (airport) attacks,” a statement said.