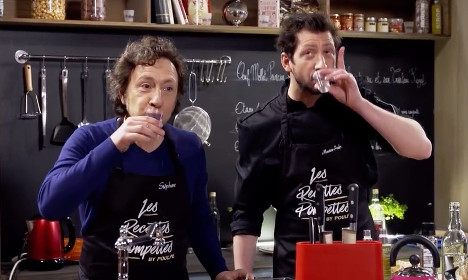 The image of a French person cooking while sipping a glass of Bordeaux is synonymous with France.

But France’s Health Minister Marisol Touraine and an alcoholism prevention association want to put an end the romantic cliché.

They have taken offence at a drinking-centric cooking show “Recettes pompettes,” or “Tipsy Recipes”, which they believe is a public health hazard.

The premise of the new French web series is that the host invites a guest to join him in cooking a recipe while they take shots.

A teaser trailer for the series shows host Monsieur Poulpe and his first guest, journalist Stéphane Bern, downing several shots of what appears to be a clear liquor while preparing a meal.

It’s meant to be humorous and fun, but the Health Minister is condemning the display of alcohol consumption as dangerous and irresponsible.

“The consequences of the excessive consumption of alcohol on health are too serious to be taken lightly,” Touraine wrote in a press release on Thursday. “The Minister of Health and Social Affairs has asked the producer of the series to take down the trailer and to scrap the series.”

She says that the series undermines prevention efforts and implies to young people that drunkenness is a harmless behavior.

But the minister might not leave it at just a written warning, as the end of the document states: “The minister is looking into other possible courses of action.”

The Association for the Prevention of Alcoholism is equally disgruntled about the web series. Just last week they criticized the Canadian version of the show, calling it a “stupid and distressing series in which media stars encourage drunkenness and make it commonplace.”

Does France have a drinking problem?

Although alcohol consumption in France has declined in recent years, the rise of binge drinking, particularly among young people, is still a cause for concern.

A survey by French health agency INVS last year revealed that alcohol was the cause of 49,000 premature deaths in France in 2014 and was responsible for 580,000 hospital admissions.

In October of 2014, the Health Minister introduced a bill to ban binge drinking, with anyone encouraging minors to drink excessively facing a year behind bars and a €15,000 fine.

François Bourdillon, head of the National Institute of Prevention and Health Education, said the drinking culture was influenced from abroad.

“This is an Anglo-Saxon phenomenon that's starting to creep into the generation of the 15-24-year-olds” he said in a statement last year.
By French law, TV shows aren’t allowed to promote the consumption of alcohol, but that doesn’t apply to internet series.

Series host and guest say it's all in good fun

The host and first guest of the web series went on the Canal+ TV show Le Petit Journal to defend the show.

“Alcohol, you have to say to yourself that it’s a tool for your guest to show another side of himself, to help the mask fall off,” said the host, Monsieur Poulpe.

The show’s first guest, Stéphane Bern, journalist and radio personality at RTL, said that “people who talk about it without having seen the series are killjoys.”

For now, the drinking and cooking will go ahead, with the first episode set to air on YouTube on April 13th.