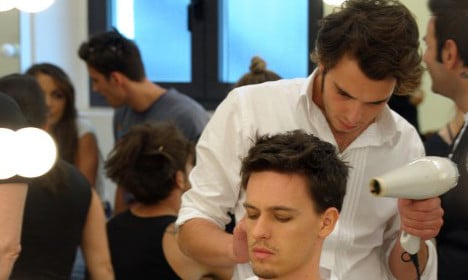 The ruling, which emerged this week in Metronews, has sparked obvious anger among the gay community, who have been left stunned, not only by the judgement but also by the tribunal's explanation.

The ruling relates to the sacking of a hairdresser in Paris last year after he failed to turn up for work, because he was sick.

Following the sacking the female boss of the salon accidentally sent a message to the employee he had just fired which said: “I am not going to keep [the hairdresser in question]. I don’t have a good feeling about this guy. He’s a dirty faggot…They're all up to no good.”

The words used in French were “sale PD“, with PD being short for “pédé”, a derogatory term that normally translates as “faggot”.

The employee took his boss to the tribunal for unfair dismissal and claimed the text message clearly showed there was homophobic motive to the sacking.

The hairdressers said the employee was let go because he was “slow” and had “trouble fitting in”, refused to do certain tasks and “aimed to quickly get a management position”.

Despite the fact that in French the word “PD” is clearly viewed as being derogatory the tribunal decided it wasn’t a homophobic insult and therefore not an aggravating factor in the man’s dismissal.

But then came the tribunal's bizarre reasoning.

“If we put it in the context of the field of hairdressing, the council considers that the term “faggot” used by a manager cannot be considered as a homophobic insult, because hair salons regularly employ gay people, notably in female hairdressers, and that poses no problem at all,” read the tribunal’s written judgement.

While ruling that the employer did not discriminate against the employee, the tribunal awarded him 5,000 euros ($5,700) for moral prejudice “because injurious words were used”.

The ruling was tweeted out this week and quickly prompted anger on social media in France.

“You are a hairdresser, you get called a faggot and that's OK because hairdressers are often gay right. Thanks to the tribunal,” tweeted Mathieu Brancourt, a journalist who revealed the ruling.

Another tweeted: “So basically it's OK to be homophobic if you work in an area with lots of homosexuals. Fantastic guys”.

Gilles Dehais president of SOS Homophobie told The Local: “It's scandalous and of course we are outraged. But this is a reflection of the ordinary homophobia that is present in daily life in France and to which gay, lesbian and transsexual people are victims of.

The ruling “may worsen the homophobic climate, which is already bad,” said Clemence Zamora-Cruz, spokeswoman of the group Inter-LGBT.

She said discrimination against gays rarely gets a hearing because the victims “prefer to keep quiet”.

The decision was “clearly homophobic”, said Nicolas Noguier, who runs a shelter for victims of homophobia. “Condensed into three or four lines, it's really all the insults that the young people we help are subjected to.”

The French labour minister Myrian El Khomri spoke out against the ruling on Friday morning calling it “outrageous ” and “shocking”.

France’s rights watchdog Le Défenseur des Droits, has become involved in the case and has confirmed the victim will appeal the ruling.