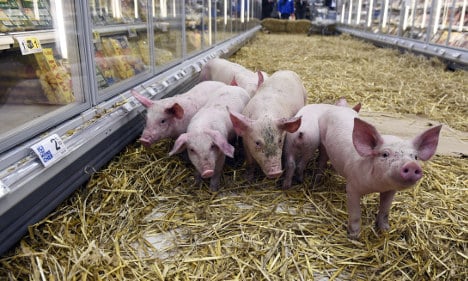 In France, the long arm of the law more often than not turns a blind eye to protesters – even when they're damaging other people's property (or indeed their own).

“How do they get away with that!” is how many foreigners react when they see the French mount one of their classic Gallic protests which often involves burning, blocking or bossnapping.

And that's exactly the reaction you'll have when you look at the images below of recent militant strike action by various groups of French protesters.

And if you want to know the answer to how they get away with it, then CLICK HERE.

French farmers protesting against falling food prices descended upon two Spanish wine trucks and emptied their contents onto the road earlier this week.

French police were at the scene, but “allowed the demonstrators to act with impunity”, the CETM, which represents truckers, said in a statement. Don't cry over spilled milk
In 2009, farmers emptied milk in the streets of Boulogne-sur-Mer in northern France during a national day of protests against plummeting wholesale milk prices. The farmers are no strangers to spilling milk. Later that year, they did it again near the Mont-Saint-Michel in western France. This time in a field. Severe train delays
In June last year, protesting French employees of the passenger and freight ferry company “MyFerryLink” blocked the railway tracks of the Eurostar Channel tunnel line. Below, workers throw burning plastic barriers on the line. Oh and they also trashed the ferries before they had to hand them over to French authorities.
Train services were suspended in both directions.
This stinks!
In November 2014, farmers across France vented their anger at the government in a series of protests including one which saw 100 tonnes of manure and rotten vegetables dumped in the centre of Chartres.

What's up, doc?
French tobacconists vandalized speed cameras and then dumped four tonnes of carrots outside the Socialist party headquarters last year after disputes over plain packaging. You can't make this stuff up. We're not yolking
But it's not just vegetables and milk. In August 2013, angry French poultry farmers went on a rampage that saw them smash 200,000 eggs in a matter of days. They had asked the government to raise the price of eggs, though their demands fell on deaf ears. Taxi wars
Taxi drivers can be as destructive as the farmers, and they love a good demonstration too. The picture below shows them pushing over an Uber vehicle during a protest in the summer of 2014.

The taxi protests usually just involve long go slows, or blocked off airports, but when they get violent then all hell can break loose. Last summer, US rocker Courtney Love was even caught up in the melee. And she was far from impressed (see tweet below).

Labour laws
At the end of March this year, there were nationwide protests over labour reforms. In the picture below, protesters push a damaged car towards a garbage bin that had already been set on fire. This incident occurred in Nantes, western France, though there were similar scenes across the country. Wheely angry
A July protest last year in Nantes saw tyres and straw dumped in front of a dairy factory as farmers protest over – you guessed it – falling food prices.
The French government unveiled a package worth more than €600 million ($655 million) for farmers, which sparked a mixed reaction, with some farmers stopping their protests but others vowing to step up their blockades.
Despite all this, a poll at the time found that 86 percent of the French public still supported the farmers. They're taking the shirts off our back
After Air France revealed a new restructuring plan, several hundred workers chased the company's head of Labour Relations, Xavier Broseta, out of his offices and ripped his shirt off. The images were seen around the world. Meating time
Piglets huddle together in the aisle where protesters put them in the meat section of a supermarket in Rennes, western France in February last year during a demonstration held by French farmer union FDSEA against the drop of pork prices. Farmers from the same union removed meats from a western France supermarket to protest meat from foreign countries. The last straw
Here's a new one. French riot police were hit by straw from a straw spreader machine as they guard the entrance to a Carrefour hypermarket, in Le Mans, northwestern France, in January this year.
They were at a demonstration of farmers against falling prices of dairy and meat products. Farmers block motorways
What French farmers enjoy more than anything is to block roads, main roads and even in the summer when the French are heading off on holiday. These were images from July last year, when road blocks were set up all around the country, causing traffic mayhem for many. Not fun or fair
In October last year France's funfair workers even got in on the act, burning blockades at the entrances to several city centres. Why? Because they were angry at the fact that their fairs have to be set up further and further from the city centres.

And finally bossnapping…
Yes the picture below is of a boss being led away by his own workers who had essentially taken him hostage for a few days. It's a common tactic in France, for which the government has started to crack down on, much to the dislike of unions who thought it was fair game to kidnap your boss and hold him until he accepts your demands.
The pic below shows Maurice Petit (C), the human resources director at Caterpillar being kept guard by his workers back in 2009.