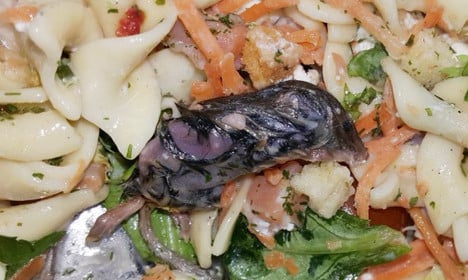 Photo first published by 60 millions de consommateurs
The man, named only as Abel in reports, found the rodent inside a salmon and pasta salad, made by Daunat, that he'd bought from a Carrefour supermarket in the 13th arrondissement of Paris.
He headed to the nearby Luxembourg Park to have lunch with colleagues, where he added the sauce to his salad and began to eat it.
But this would be a salad to remember – for all the wrong reasons. After several fork-fulls  Abel found the dead furball hidden underneath his pasta, reported the 20 Minutes newspaper.
The 28-year-old, reportedly took the meal back to the supermarket, where he eventually refused the manager's compensation offer of a €10 voucher.
He then visited a doctor, who advised him to hand the mouse over to health authorities.
The man and his partner are now planning to sue the manufacturer Daunat, in the hopes of a payout.
While the couple have been told they could fetch as much as €4,000 for their horrors, it's not money that concerns the 28-year-old.
“I can't finish my meals anymore, I have to take medication for digestion,” he told the paper.
It remains a mystery how the rodent managed to get inside the plastic package of salad.
A spokesperson from supermarket chain Carrefour said the team was taking the matter seriously and had been in contact with manufacturers at Daunut, reported 20 Minutes.