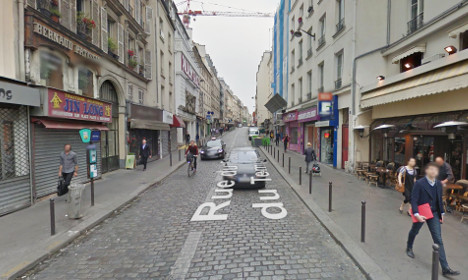 According to reports in the French press, the man fired several shots from the window of his apartment on the junction of Rue Bichat and Rue Faubourg-du-Temple in the 10th arrondissement near Canal St Martin.

No one was hurt and the area was quickly cordoned off by police.

“I was walking past that exact area at that exact time; as I turned into Rue d'Aix I heard several large crack sounds,” local resident Sam Davies told The Local.

“The sounds were quite unusual and given the recent history of the area, I immediately thought of gun shots, but my brain didn't compute that this might actually be the real reason.”
Paris has been on edge since the November attacks but nowhere more so than the area around Rue Bichat and Rue Faubourg de Temple, which was the site for several of the café shootings.

On November 13th, the gunmen opened fire at Le Petit Cambodge and Le Carillon on Rue Bichat, killing 15, before travelling along to the Café Bonne Biere on Rue Faubourg de Temple where five more were killed.

One witness described how police and locals were both left fearing the worst after Thursday’s shooting.

“The police were really nervous. They were pointing their guns in the direction of Rue Bichat. They are evacuated people from the area,” the witness told BFM TV.

At Café Bonne Biere “people hit the floor. There was panic,” the witness added.

But the police have made it clear the shooter was drunk and had nothing to do with any terrorist group.

He was arrested just before 2pm in his top floor apartment. Police confiscated two guns.