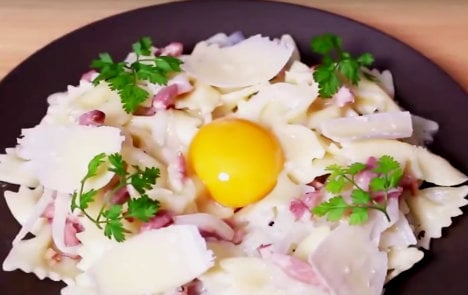 Does this carbonara offend you? Photo: Screenshot/The Local

The video was uploaded to YouTube by French news site demotivateur in late March, but went viral in Italy this earlier week, as thousands of Italians shared the video, mostly with ironic comments.

It even prompted a response from the nation’s largest pasta producer, Barilla, who realized a box of their pasta was used to make the video.

“We’re open to all kinds of variations on the carbonara, but this goes too far…désolé (sorry),” the company wrote in a comment on its official Facebook page.

The fuss has been caused by the French site’s complete disregard for the rules of Italian cooking.

According to longstanding culinary tradition, the Roman carbonara is made with egg, cheese, pepper and bacon.

The video’s questionable addition of crème fraîche and onion to the mix, not to mention the unorthodox technique of boiling the pasta with the onion and bacon, was enough to send Italian internet users into overdrive.

Since last week, the comments section under the video has been bombarded with comments from Italians letting demotivateur know exactly what they think of its ‘one-pot carbonara.’

“If this is a carbonara, then I can make a [traditionally French] Saint Honoré cake using mayonnaise, marshmallow and wafer!” wrote Tomasso Grimaldi.

He was by far not the only Italian to take umbrage.

Others told the French to “stick to frogs legs and snails”, while another suggested that the recipe was “absolute filth”.